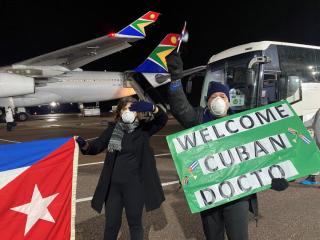 Minister of Health, Dr Zweli Mkhize, has reflected on the vital role the Cuban Brigade played in assisting South Africa's efforts to combat the lethal effects of Covid-19.

The minister was joined by the Cuban Ambassador, Rodolfo Benítez Version, during a virtual meeting during which the two talked about the duties of the Cuban doctors, who arrived in the country in April, just as the country began battling the COVID-19 pandemic.

The Eastern Cape was assigned 12 medical officers, four of which were biomedical engineers, two epidemiologists, and two biostatisticians.

“The medical officers have been resourceful in Primary Health Care as this is their speciality. Their data analytics and information management have been key in assessing the impact of intervention strategies.

“The biomedical engineers have been critical in the design, installation, adjusting, repairing and provision of technical support for biomedical equipment,” the Minister said on Friday.

Members of the Cuban Medical Brigade were also distributed throughout all five Gauteng districts while some have been doing work with the central office.

“They are mainly working in quarantine and isolation sights, ward-based contact tracing, epidemiological surveillance and in hospitals where there has been noticeable nosocomial spread,” the Minister went on to say.

In the Northern Cape, the brigade is doing outreach services in critical areas of need.

“They are clinical leaders to the management teams and assist in the screening, testing and quarantining of patients. The Northern Cape Department of Health has attested to the invaluable contribution of the Covid-19 personnel from the Brigade,” the Minister said.

“Three clinical engineering technologists, one hygienist and one biostatistician are stationed in Capricorn District. The deployments were based on areas where it was identified there was a shortage of human resources.”

The presence of the brigade helped to reduce the workload.

“Their presence has reduced workload and pressure on staff members, provided much-needed relief, improved processing of data and contributed to improved data reporting that feeds into the daily situational report on COVID-19 in the province,” the Minister said.

Health technologists also helped with the evaluation of non-functional equipment.

The team made up of 28 professionals experienced in the planning, execution, and the management of public health were deployed to the Western Cape.

“They were fully integrated into the clinical teams working alongside the South African health professionals in order to strengthen the province’s response to COVID-19,” the Minister said.

Meanwhile, 17 members of the brigade were deployed to the Free State. Their apportionment addressed concerns of staff shortages which led to streamlined data collation in the province.

“Whilst this is not an exhaustive account of the activities of the members of the brigade, the reports reassure us that we have invested well in this initiative with trusted allies during a critical phase of the national COVID-19 pandemic,” the Minister said.

Ambassador Verson says that South Africa has provided an excellent working environment for the doctors.

The results of 31 Cuban biomedical engineers include 787 equipment repairs.

Verson ended by saying that since their arrival in April, the doctors have been treating nearly 30 000 patients and they have saved 166 lives.

“Many of our doctors are working in quarantine. Our biomedical engineers have achieved impressive results.”