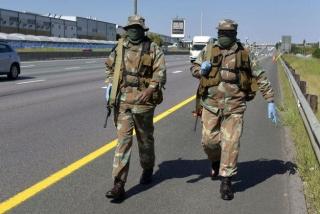 President Cyril Ramaphosa has informed Parliament of his decision to extend the employment of 20 000 South African National Defence Force (SANDF) members from 27 June until 30 September.

The development was confirmed by Parliament on Thursday. In a statement, Parliament said National Assembly Speaker Thandi Modise and Amos Masondo, the Chairperson of the National Council of Provinces (NCOP), received the communication of the decision on 30 June.

The expenditure of the extension of the service, which is in line with Section 201(2)(a) of the Constitution read with sections of the Defence Act, will be R1.5 billion. The President in March initially authorised the employment of 2 820. This was extended to 76 000 on 21 April.

“Their service is in co-operation with the South African Police Service (SAPS) to maintain law and order, to support other State Departments and to control South Africa’s borderline to combat the spread of COVID-19 in all nine provinces,” read the statement.

In his correspondence to the two presiding officers, President Ramaphosa said the outbreak of the virus in the country continues to increase. Parliament said the President, in the letter, emphasised that it was for this reason that the service of these SANDF members is still needed.

During this period, and until the virus is brought under control, members of the SANDF will be mandated to support and work with the National Department of Health in managing the virus.

The SANDF will also support the Department of Cooperative Governance and Traditional Affairs in its efforts to maintain and enhance the living conditions of the population. This will include the supply of water and engineering services.

With regards to security, the SANDF will support the SAPS’ efforts to enforce the lockdown regulations.

Parliament said the President, Modise and Masondo need to bring the contents of the report to the attention of the respective Houses.