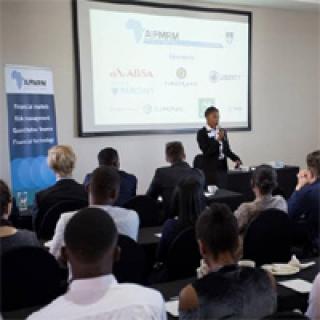 Donor Day 2018 saw some of SA’s most prominent financial services providers paying a visit to AIFMRM – and, of course, these are the organisations that made it possible for AIFMRM to go from a dream to a rapidly developing centre of excellence in a few short years.

On Donor Day 2018, AIFMRM received a visit from some of South Africa’s most prominent financial services providers – those that made the Institute’s growth possible – underlining the importance of collaboration between corporates and learning institutions in developing the industry.

Students were able to network and engage with alumni and established financial professionals, while sponsors had the chance to see first-hand the difference their donations had made in developing much-needed skills.

“Everything we do at AIFMRM is 100% dependent on the support that we get from a group of prominent companies in the financial services sector,” said AIFMRM Founding Director David Taylor.

“They showed faith six years ago when we were starting out with a dream. Now we have 14 PhD students and four Postdoctoral Research Fellows. Thanks to their support, we have gone from zero to well-established very quickly.”

South Africa has struggled to plug a critical skills gap in the finance sector. The National Skills Fund, part of a national drive to develop skills across the country, does not include finance development projects. The finance sector, after the IT sector, has been identified as one of the areas most in need of skilled professionals.

In January 2018, international mobility group Xpatweb ran a survey reporting that 75% of companies in South Africa were seeking scarce skills, such as financial specialists, abroad.

All that is changing, thanks to growing investment in financial skills development. In 2017, AIFMRM celebrated having received R10 million over five years jointly from Old Mutual and Nedbank, which joined several other major banks and insurance companies in investing in the Institute. Other major donors include Absa, First Rand, and Liberty, with Sanlam joining as a new donor in 2018.

Meanwhile, the Banking Sector Education and Training Authority (BANKSETA) contributed over R5.25 million in bursary funding for AIFMRM in 2017.