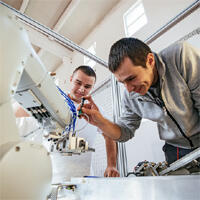 We are now fully emerged in the 4th Industrial Revolution and, over the next 20 years, this is going to have a massive impact on our working lives. What was once considered paradoxical is now a reality.

In 2018, the global unemployment level fell to 5.2%, the lowest in 38 years. And there is no denying the fact that a record number of robots (the age in which we currently live), would have had some impact on this. We’re moving in a high tech world! But before you think I’m being a profit of doom... because of this synchronicity there is also greater flexibility and accessibility, but we need to move with the current and not against it.

So, if you do fear that unemployment will steadily decline and the workforce will be replaced by robots, it needs to be recognised and accepted that the world IS going through significant and unprecedented change. Machines, automation and AI are part of this reality.

In an article on State of the Planet, by Renee Cho, she states that some animals can adapt to climate change. Animals can react to climate change in only three ways: they can move, adapt or die. It’s a dramatic analogy, but, much like the animals, we need to learn to adapt to our changing world of work.

POP Training and Consulting has extensive experience in building excellence through people.