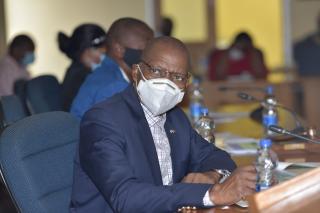 Health Minister Dr Zweli Mkhize has confirmed that government is considering swapping the AstraZeneca vaccine with other countries.

This comes after research showed that the AstraZeneca vaccine is only 22% effective against the Covid-19 variant commonly found in South Africa, 501Y.V2.

This is because the AstraZeneca vaccine was tested against the more common strain of Covid-19, instead of the variant which was later found in South Africa in December 2020.

The Health Minister explained that the government placed the order for the vaccine based on findings from the trial which took place before the discovery of the 501Y.V2 variant.

According to the Minister, delaying the process of ordering the vaccines would have resulted in the country being placed at the back of the line for vaccines "due to global shortage of supplies.”

The AstraZeneca vaccine has now been suspended, following its arrival in South Africa on 1 February.

Mkhize said despite public speculation, the AstraZeneca vaccines have not yet expired.

Government is now looking to use the Johnson & Johnson vaccine in the new rollout plan.

“The Johnson & Johnson vaccine has been proven effective against the 501Y.V2 variant and the necessary approval processes for use in South Africa are under way. The roll out of vaccination will proceed in the form of an implementation study with the partnership of the Medical Research Council and the National Department of Health vaccination sites across the country,” said Minister Mkhize.

Health care workers can register to get vaccinated on the vaccine portal by clicking this link and following the steps given on the site: http://vaccine.enroll.health.gov.za.