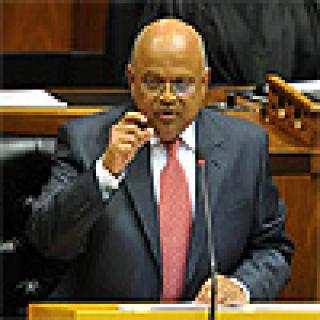 While the rand?s volatility is good for some sectors of the economy, it has inflationary impact on others, says Finance Minister Pravin Gordhan.

"The rand?s volatility is unhelpful. While it benefits some sectors, it will have an inflationary impact on others,' Gordhan said on Wednesday. He further said that authorities were watching the volatility.

"Many factors are acting against us,' said the minister, adding that global uncertainty was one of the factors.

Gordhan was briefing the media following last week?s International Monetary Fund (IMF) and World Bank meetings. South Africa also chaired the meetings of the G24 - which is made up of developing countries in the IMF and World Bank at a meeting of the Commonwealth Finance Ministers.

The significance of the meetings to ordinary people, said Gordhan, was that in some countries, citizens have not been told of the proportion of the crisis in developed nations.

"South Africans should be mindful that we live in dangerous times (according to the IMF),' he said.

South Africa also needed in this time of global uncertainty to look at ways of securing current jobs seeing that the country trades with Europe of which growth rates are slower.

"You?re going to have diminished demand,' he said.

Therefore, the minister said, South African businesses need to do more business with other African countries.

"We need to understand that the future we are moving into is different. We need innovation,' he explained, while adding that government still intended to invest in job creation.

The way in which government spends tax money also needed to be looked at and more should be spent on investment as opposed to consumption.

However, developments in the world did not mean that "we should be shocked by fear' but rather that the country applied itself to change and to make the right policy changes.

Gordhan said the meeting had discussed the possibility of another recession. There was a likelihood of "sustained view generally.'

"There was agreement that we will contain the worst,' said the minister.

The developments in the Euro area led leaders to the generally accepted view that the rest of the globe will be impacted on seeing as though countries form part of an interconnected globe.

The view from developing countries was that more needed to be done to for "innocent bystanders who will suffer the consequences' of the crisis in Europe.

"What was reassuring was the profound recognition of the serious crisis,' said Gordhan, adding that the BRICS countries had also agreed that "we are in this together' and that a global solution was needed to resolve the matter.

"We all have to come to the party and contain the problem,' said Gordhan.

The challenge for South Africa, and other countries, was to ensure growth, while the issue of job creation for the youth was also on the agenda. - BuaNews