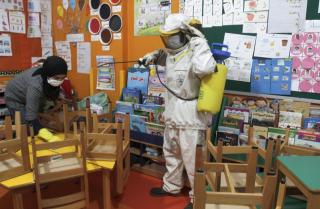 The supplies were donated by the short-term insurance company, Santam.

The donation, which took place on Thursday morning at WH de Klerk special school in Emalahleni, Witbank, is the second such donation, which is in line with support given to specials schools.

Among the items donated are a motorised, pressurised sprayer, gloves, sanitisers, as well as other essential items to ensure safe learning facilities now that schools have once again begun to reopen.

“Santam has donated sanitisers and equipment that should be used when an area has been contaminated. This is very important because, in the past, we have seen schools highly disrupted because they did not have their own equipment to disinfect when there is a case of COVID-19 infection.

“It will help us to manage schools. Schools are being trained to use the equipment to disinfect, so there won’t be any major disruptions,” said the Minister.

While the donation is a result of a public-private partnership with Santam, which has a longstanding experience in the space, it also follows the release of a report by the South African Human Rights Commission around issues of safety in special schools.

“It is part of a broad intervention arising from the report that was released by the South African Human Rights Commission on issues of safety, particularly at hostels in special schools.

“Santam was already working in this space and we thought they could be part of the intervention to look broadly at how we could respond to safety issues,” said Jabulani Ngcobo, the Basic Education’s Director for Inclusive Education.

Ngcobo said that the initiative, which involves around 81 schools in various provinces, aims to not only improve the safety in specialised schools but also to combat Covid-19

With the costs of decontamination for a school being around R10 000 - R20 000, Ngcobo said this initiative will see schools manage disruption while saving money at the same time.