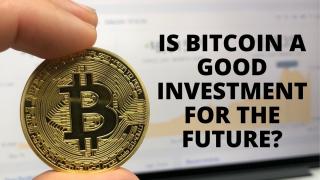 Digital currencies like bitcoin might be all the rage right now but is it wise to invest your money in this asset? The concept of digital monies that people send online is not that complicated in itself. Cryptocurrencies, like bitcoin, are a form of payment that uses blockchain technology to send data in cyberspace. Each bitcoin must be mined via computational means.It is finite – only 21 million bitcoins that can be mined in total.

What is Bitcoin and Cryptocurrencies?

Bitcoin is a virtual currency that, as per some experts, could replace cash in the future. Most of its functions could be achieved by other means, but it certainly does have its advantages. For one, it’s not regulated by any one government. Furthermore, it’s easy to buy bitcoins from exchanges around the world without asking any questions from any bank, credit card company, or other financial institution. Also, there are issues surrounding the way bitcoin exchanges are set up and operated. In addition, it is likely that cryptocrime and fraud will only increase.

Can Bitcoin replace or save traditional banking?

What are the risks?

The currency is too volatile. Although bitcoin’s price has surged over the past year, the crypto-currency faces huge risks. The bitcoin price spiked in the past year, rising from around $1,000 per coin to over $10,000 per coin. But it is still about half of its high. Some experts attribute this price increase to investors’ fear that regulations will eventually come, and they should be getting into the crypto-currency now before they disappear.

What are the benefits?

The value of Bitcoin can increase overnight. Although the rise may be attributed to the popularity of bitcoin mining, the number of people who mine bitcoins and other currencies is quite low. Another benefit of digital currencies is they are free from government interference or inflation. These assets are not subject to the will of central banks or governments and thus hold their value.

How do I Invest in Bitcoin?

There are a few different options to invest in cryptocurrencies. The easiest way to invest is to purchase bitcoin at a regulated exchange like Coinbase. There are also a few ways you can buy into the bitcoin ecosystem via other methods, such as purchasing Ether or Litecoin tokens on an exchange, with the idea being that these will trade at higher or lower levels than bitcoin.

The current state of the cryptocurrency world is certainly very volatile and prone to hacks. However, there is a strong bullish sentiment around these currency because of its decentralised and encrypted system.

Disclaimer: This article is for informational purposes only and should not be regarded as an investment advice. Please conduct your own due diligence before making any investment decisions.