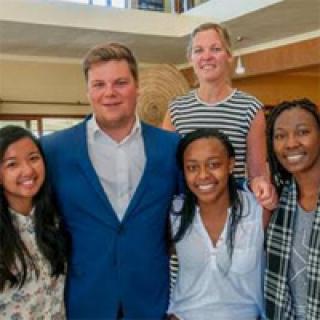 Grahamstown, 8 September 2016 – Kwantu Private Game Reserve is continuing to play a role in the advancement of hospitality management industries in Southern Africa.

Under the arrangement, Kwantu becomes an experiential learning site and partner in South Africa, allowing local students to traverse hospitality management, operations and guest relations at an African wildlife game reserve as part of training, exposure and practical learning.

Last month, Kwantu welcomed Stenden students during an excursion at the reserve.

“While we are in Africa, we need to see and visit lodges to get a better understanding of how they operate,” said Velthof who is from Holland.

“The aim of the student visit is to get an in-depth understanding of the Africa’s game reserve industry and operations so that they [students] could potentially become lodge managers in future,” she said.
Kwantu Private Game Reserve CEO Shakir Jeeva said Kwantu said “The Stenden relationship strategically aligns with our vision of supporting and empowering future leaders and emergent professionals in hospitality management industries”.

“We know that Kwantu and South Africa will offer an exciting learning laboratory of practitioner-driven insight that will prepare students for the demands of global hospitality industries,” he said.
The reserve in August has been listed as finalists in three major travel and hospitality awards this year, including the SANLAM Top Destination Awards 2016, The Haute Grandeur Global Hotel Awards and The World Luxury Hotel Awards.

South Africa as a melting pot for Hospitality Learning
Jessica Pfotenhauer of Botswana has been at Stenden since 2015 and had her first experience of working in the hotel industry while taking a gap year in Botswana.

“South Africa is a great place. There is so much cultural heritage and the Eastern Cape is a really great province,” said Pfotenhauer.

“It is interesting to learn about Kwantu’s business model especially since they cater for a niche market.”

Yannick Groendijk who is a third year Hospitality Management said, “I came to South Africa to explore different cultures. This is such a great country. I really like the people here they are helpful and polite. This experience can contribute to the development of lodges where I live on the Schiermonnikoog Island in Holland,” he said.

Sarah Chirombe of Zimbabwe said South African wildlife game reserves are magical: “This has been a very surprising visit and I enjoyed it,” said Chirombe.
Chirombe has been in South Africa since 2015 says she always enjoyed working with people.

“My grandmother and mother are both caterers. During the school holidays in Zimbabwe I helped with the business. I think that is where my love for the hospitality industry started,” said Chirombe.
South African national Siyathokoza Zuma from Durban joined Stenden in 2015.

“I am the first in my family to work in the hospitality industry. I want other women to work in this field. There are so many opportunities in the tourism industry and the hospitality sector is rapidly growing.” Zuma added that it was interesting to learn how Kwantu “makes business and deal with their clientele and marketing strategies”.

“It is interesting to know how they benefit the community, how they hire staff and the number of women working at Kwantu,” Zuma said.