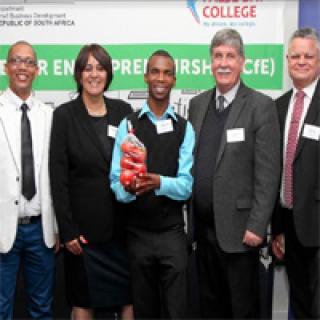 The Centre for Entrepreneurship (CfE) Poster and Pitch Competition winners were awarded a collective cash prize of R55 000.00. This money will help winner’s kick- start their viable business ideas. Entrants were False Bay TVET College students and graduates, who prepared a poster demonstrating a new business idea. Thereafter, one on one consultation took place to sharpen the business ideas for adjudication day.

The inaugural internal Poster and Pitch competition was hosted at the False Bay TVET College Conference Centre. Entries came in from all of the 5 False Bay TVET College campuses and each business idea was evaluated based on the growth, profit and the entrant’s entrepreneurial spirit. A total of 23 submissions were received of which 15 proceeded to the adjudication process.

Runner ups winners included:
Keiokantse Bothlolo for Beyond Code (Bua App) developed an App that is set to translate to all of the 11 official languages of South Africa.
Jenna Hendricks for Jig Plumbing, a start-up female owned plumbing company
Nicole Petersen for Frenzy Events, servicing corporates, communities and social events
Vuyolwethu and Malebo were acknowledged for Tree Tech, a service to their community offering computer skills exchange programmes
Elmarie and Nathan who call their company E&N’s RTC. E&N RTC makes furniture from upcycling products, for the less privileged.
Abe Olivier, Programme Manager at the Centre for Entrepreneurship said “The purpose of the competition is to activate and inspire entrepreneurial behaviour. It further strives to showcase that entrepreneurship is a viable gateway to finance independence. While the competition may have concluded, the mentorship is ongoing”.
The Poster and Pitch competition is a joint collaboration and prizes were proudly sponsored by Future Managers, Rotary Newlands, Nedbank and Serina Trading. Special international guests in attendance included Dr Jack Birmingham, President of Highline College is Seattle with his delegation to participate in the judging process. 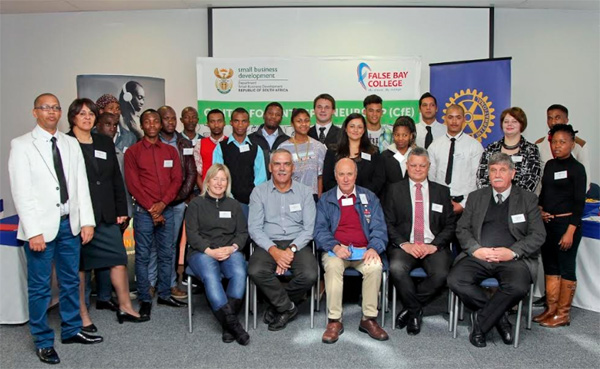