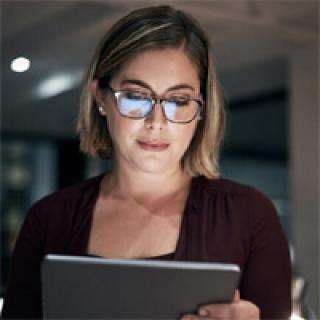 The popular TV series Mad Men tells the fictional stories of the cutthroat advertising industry in the 1960s. According to critics, women were the stars of the show as they were able to transform and adapt, while the male characters could not. This is a quality that is also required today in order to progress.

Ansonette Potgieter, independent sales consultant exclusively contracting to Novus Print, a division of Novus Holdings, just like the female characters in Mad Men, had to work twice as hard as her male counterparts to prove herself.

“What I have learnt throughout my career working in the male-dominated areas of media sales and printing, is that if you work hard and you deliver, men respect and accept you.”

Potgieter studied to a BComm at the University of the Free State. When she completed her degree, she applied for a bookkeeping role at a prominent newspaper in the area, but HR very soon realised her talent for marketing and sales, and offered her a position in the sales division.

“I faced a steep learning curve early on in my career. I was appointed as a Classified Sales Manager for a newspaper in March 1996, which at the time was dominated by older men. I was about 26 years old and had taken over the reins from a senior and well-respected man. I think the rest of the team found it hard that not only was I a ‘youngster’ but also a woman.”

When she moved to Johannesburg in 1998, she was appointed as a regional sales manager for Pretoria News, where she achieved record sales for the newspaper at the time, and was promoted within a year and a half.

“I had a very understanding female boss, who gave me the freedom to push the boundaries and achieve more than what was possible. I knew very early on that I didn’t want to be put into a box, and this worked in my favour.”

She attributes much of her sales success while at the newspaper to the fact that her team was mostly female, and they didn’t let their gender roles stop them.

Potgieter then moved with her family to Kwa-Zulu Natal where she was appointed by the Natal Witness as the General Manager of the Coastal Region, and in 2013 she moved from media advertising sales to printing when she was appointed by Novus Holdings, one of South Africa’s leading printing and manufacturing companies.

“When I joined, I had to be creative in how I found clients as many of the sales leads were taken. I did not let the fact that I was female stop me; I went to many of the independent cash and carries in areas that may have been perceived as unsafe for women; normally it would be men to find these leads. I brought on new business this way.”

Potgieter believes that customer service needs to be exceptional in order to maintain business today.

“If I am not customer-focused I won’t survive in this industry. Print is print, and price is price, which means that to survive a tough market, you need to offer something unique and different,” says Potgieter. “We regularly give clients updates on delivery times, dates and are willing to bend backwards to accommodate a customer. Exceptional customer service means going above and beyond what is expected.”

She gives the example of how one of her clients needed to have a leaflet printed and delivered the day before the Easter weekend. However, the material was late which impacted on the delivery times.

With the media landscape changing, does Potgieter believe there is a future for her to make a difference in the printing world?

“Absolutely. I love the media and am passionate about the way that a newspaper smells, and the touch and the feel of a magazine. I have seen how the landscape is changing, but I have also seen requests for more niche titles and magazines, and I believe that there is much, much more opportunity in this industry,” concludes Potgieter.

Ansonette Potgieter, independent sales consultant exclusively contracting to Novus Print, a division of Novus Holdings, is today one of the most respected sales executives in the printing business, despite the industry being male-dominated. The climb up this corporate ladder wasn’t always glamorous.