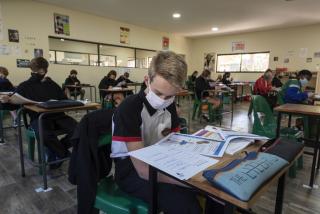 As Grade 7 learners return to school today, the Department of Basic Education (DBE) has urged communities to protect schools against any individual or group threatening to close schools and disrupt learning.

The DBE says that it is aware that some members of school governing bodies (SGBs) around the country have attempted to close schools and disrupt learning. In Gauteng, SGB members reportedly disrupted 38 schools in Daveyton/Etwatwa, 37 schools in Tsakane, and eight schools in KwaThema on Thursday.

There are reports of the Congress of South African Students (COSAS) also disrupting schools across the province.

“The department would like to remind all members of SGBs that the closing of schools remains a legal function reserved for the provincial Head of Department.

“When members of the SGB act outside the legal dictates of their role and function, they risk the immediate disbandment of the entire SGB.

“The Council of Education Ministers is on record as having warned that any individual or group, who disrupts learning at our schools, will be reported to the authorities, and the department reserves the right to charge them with violation of the South African Schools Act (Act no. 84 of 1996),” the department said.

The DBE ended “SGB members are urged to use the available channels to register their dissatisfaction, as per Chapter 3, Section 21 of the Act, which states that ‘Any person aggrieved by the decision of the Head of Department, in terms of this section, may appeal to the Member of the Executive Council. Failure to follow this directive may result in the immediate disbandment of SGB members,”