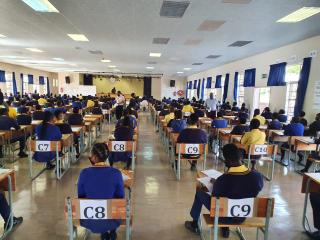 Cosas does not want matric learners to be examined on the full syllabus. It believes that learners had unequal access to educational resources, which could make it difficult for them to get good grades.

Cosas spokesperson Douglas Ngobeni said Cosas could take to the streets to protest for learners.
He said learners in public schools have been most affected by inequality.

"Covid-19 has exposed the greatest form of inequalities in South Africa, particularly in the Department of Basic Education where those in private schools would be able to conduct online lessons. During the dark day of the pandemic... our learners from public schools would not have any form of teaching and learning,"

"We know for a fact that papers are set well in advance but in this case, we would not want our learners to write those advanced question papers necessarily because we believe that they are a class of social calibre"

Earlier this year, public schools took a 4-week break following an announcement from the President. During this time, private schools stayed open and transitioned to online learning.

Cosas threatened to shut down private schools as it felt that allowing them to stay open would create more inequality in the education system.

Basic Education Minister Angie Motshekga said she had met with stakeholders of independent schools who chose to keep their schools open.

"They indicated that their schools were not covered in the relief funds, and that some of their schools had closed down permanently due to the dire financial situation; and learners had been displaced and teachers lost jobs."

"It was, therefore, determined as not serving the best interest of anybody to ask private schools to go on a break," she said.

Ngobeni said Cosas will no longer engage with the department in boardrooms, as it plans to strike should matters become worse for the class of 2020.