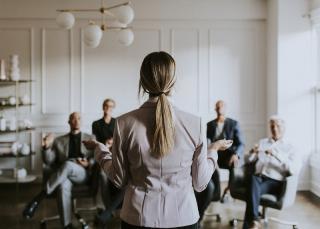 Deserted streets, breathalysers replaced with swabs and a significant portion of the population suffering symptoms of nicotine withdrawal. This isn’t a movie- this is very real and we can’t fast forward to a happy and predictable ending.

COVID-19 is a horrific tragedy. The last great disaster that captured the world’s attention was probably the attacks that saw the World Trade Center come down. Leadership played a critical role in the aftermath, but let’s face it – the damage had been done. Right now the damage is in the making and the role that leadership plays now and in the aftermath to the pandemic, will be written in the global history books and shared between generations.

If you have not yet come across this term, VUCA is an acronym standing for volatile, uncertain, complex and ambiguous. Lockdown 2020 will certainly go down in history as one example of just how uncertain life actually is. It is, however, worth noting that COVID-19 should really not have come as a surprise to senior leaders around the world.

Three years ago, I developed a course which I never managed to sell, called “Human Capital Acquisition”- a fancy name for how organisations should respond to the Fourth Industrial Revolution with specific emphasis on workforce management. In my research, I studied numerous reports published by the World Economic Forum (WEF). In their January 2017 Global Risks Report they very kindly summarised the top 5 global risks (likelihood and impact) going back to 2007.

In 2007 “chronic disease in developed countries” was no 2 on the list followed by “oil price shock”. Between 2011 and 2020, they don’t feature at all on the top 5 list but in the 2020 report, “infectious diseases“ and “energy price shock” are identified as risks but not within the top 10 ones. If you wondering what eclipsed these risks, they include risks like extreme weather, climate action failure and natural disasters.

Strangely enough, something led to pandemics being put securely on the agenda in October 2019 when the Johns Hopkins Center for Health Security, hosted the fourth of a kind, tabletop simulation exercise based on a coronavirus. Apparently, the simulation identified a massive preparedness gap. I found this quote from Eric Toner (Senior scholar Johns Hopkins Center).

“Once you’re in the midst of a severe pandemic, your options are very limited. The greatest good can happen with Pre-planning”.

What was also not apparent in the simulation, was the extent to which the private sector would need to be involved. I think we see the result of that lack of preparedness now; the frantic juggling acts by individuals placed in very senior leadership positions.

Anyway, it is not my intention to criticise global leadership during this period. Some of the juggling acts we have seen have been beyond innovative and we must take our hats off to man’s ability to adapt rapidly in what is an extremely volatile, uncertain, complex and ambiguous (VUCA) situation. We should also take our hats off to the private sector who has in many cases saved the day.

Let us, therefore, explore the VUCA concept as we see things unfolding in the world now.

I found this perfect definition of volatile – “liable to change rapidly and unpredictably, especially for the worse”. This is precisely what the statistics are doing as we speak and what leaders have to deal with right now. Apparently, the correct leadership response to volatility is to combat it (yes we are in war) with vision. The governor of New York State, Andrew Cuomo has certainly committed to communicating a compelling vision to win the war.

He has committed to empathetically sharing and clarifying the facts and to urging the community to be smart and to stay at home. Amidst the volatility of the statistics, he has steadfastly maintained composure even though he has shown us his soul when discussing his brother who contracted the virus.

I found this definition of uncertain – “not able to be relied on; not known or definite”. This certainly explains some of the indecisiveness we have seen during this pandemic. Meaningful Information is scarce and what we do have is fraught with risk. Acting without knowing for sure under such circumstances can be a matter of life or death. The clever guys say we must combat uncertainty with understanding. Well, how does one do that in this situation?

I expect that leaders must surround themselves with people who do know more than them and make decisions based on what can be understood from the basic facts. I would think in this situation in the world, one must act on the principle “rather be safe than sorry”! Then while you are doing this, you are constantly open to learning more in order to improve decision-making. I admire the way in which the world has come together to share their experiences and in so doing to make situations less uncertain.

The future is certainly not going to be friendly to command and control type mavericks.

I found this less than adequate definition of complex – “consisting of many different and connected parts”. Complex speaks of “large” with many things happening at once but somehow interconnected although we don’t quite see the connections yet. Sometimes the connections are apparently contradictory. The COVID-19 stats seem to have a constantly changing trajectory forcing leaders to constantly be revising their conclusions.

The globe is certainly a complex place without adding COVID-19 to it! The problems leaders face in the world as a result of the interaction between politics, power, people and the planet are beyond complex. Unemployment, poverty, crime, greed, refugee exodus, depression and immorality are just some of the facts leaders face daily.

Apparently, leaders must combat complexity with clarity; so they must “unpack” complex situations and focus. In addition, they must use their instincts (intuition). I came across a concept years ago in a book by Jim Collins; he likened the strategy to the efforts it takes to get a full 44-gallon drum rolling. Progressively well-timed kicks or pushes gets the drum rolling.

Continue the kicks and the drum picks up the momentum of itself and you can ease on the kicks somewhat. Eventually, the drum rolls on its own and you just keep it moving and going in the right direction. Perhaps this is how you fight complexity- you experiment with various options, but you never give up on anyone, unless it is clearly not working. Someone once said that us humans are good at declaring failure well before we have actually failed.

I found this definition of ambiguous – “open to more than one interpretation; not having one obvious meaning”. Well, ambiguousness is what adds to the uncertainty – in addition to the lack of meaningful information, we deal with information that can be interpreted in more than one way. (the face mask confusion is one of them) It is not as if the world has a pandemic every year which leaders can learn from to prepare themselves.

It strikes me how important models which can project the impact of decisions are. At the same time, I am reminded of how important the human instinct we referred to previously is. We are in the 21st century and our weather models still cannot predict the weather effectively!! We must combat ambiguousness with innovation and adaptability. We have certainly seen this during COVID-19.

My prayers are aimed at Global Leaders, healthcare workers and families of those who have lost their lives to this pandemic.

I do believe there is a light at the end of the tunnel. Vasbyt.

For more information, please contact David Loubser, R&D Manager at Supatrain, mobile 084 556 3103 and on email [email protected] or feel free to browse our blog on www.supatrain.wordpress.com