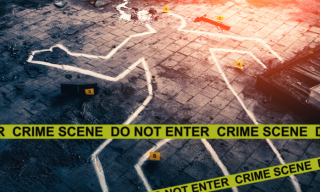 The 2019/20 crime statistics have revealed that while South Africans recorded fewer violent crimes, SA’s murder rates have increased between April 2019 and March 2020.

According to the annual crime statistics released by Police Minister Bheki Cele on Friday, violent crimes, particularly murder, have been slowing down over the last three years.

The document reveals that 21 325 people were murdered over this period - an increase of 1.4% from the previous report.

“Indeed we are not where we want to be, however, we are pleased with the improvements in most stubborn crime categories,” he said.

“KwaZulu-Natal is the capital and recorded the highest number of murders out of all the nine provinces, which increased by 10.6%,” he said.

According to Cele, Umlazi and Inanda townships are the murder hotspots in the KwaZulu-Natal.

“KZN also recorded an increase in sexual offences and trio crimes. Operational interventions are in place to stabilise KZN; including strengthening the resources under Operation Vala in KwaZulu-Natal.”

Meanwhile, the Western Cape shows some improvement with statistics indicating that specialised policing in targeted areas does produce results.

For the first time in many years, Nyanga Police Station recorded a 36.0% decrease in murder. “Even last year there was a decrease. We are indeed turning the tide against crime.”

Meanwhile, in attempted murder, Gauteng tops the statistics with 4 639 cases, followed by KwaZulu-Natal with 4 161, the Western Cape with 3 555 and Eastern Cape with 2 409.

Seventy-three police officers who were killed of which 35 were murdered on duty and 38 off-duty.

Also, on the 17 community reported crimes; the police recorded a visible decrease of 2.7% as compared to an increase of 0.7 % last year.

Meanwhile, the Minister said last year the police deployed intervention measures to deal with stock theft. This generated positive results as stock theft has recorded a decrease of 4.2%.

There has been a drop in property-related crimes, where all crimes under this category indicated a major decrease - including a burglary at residential premises which has declined by 6.7%.

Furthermore, robbery at residential properties has also recorded a decrease of 5.8%.

The Minister went on to say that the pandemic has radically redefined traditional policing.

Cele went on to say that social distancing is the new normal; effecting an arrest and a deployment at a Community Service Centre suddenly demands a different standard operating procedure.

“All men and women in blue in the Republic of South Africa collided with the drastic turn of events and had to immediately adjust whilst focused on serving and protecting the nation.”

In the call of duty during this pandemic, the SAPS lost a total number of 113 police officers, while 12 138 have contracted the virus with 254 hospitalised and 4 904 recoveries.

“We would like to pay our respect and salute the role of our departed members in the fight against crime. We also want to convey our sincere condolences to their families, their children, spouses and colleagues,” said Cele.