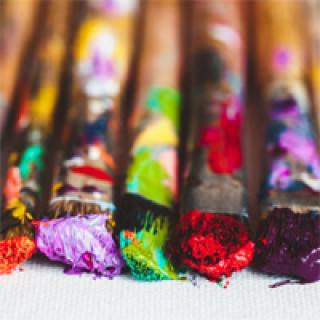 Michael Beckurts, the winner of the 2018 Young Creatives Awards, started art lessons at the age of six as a form of rehabilitation to regain his fine motor skills after surgery, but is now on track to turn his passion and talent into a creative career.

Imagine a landscape devastated by fire – lovingly planted trees now burned to the ground, patches of scorched earth and blackened vegetation stretch towards the horizon. And in the foreground, an empty deckchair – a stark reminder of the inhabitants who once enjoyed a lush green view.

This bleak scene was captured by Michael Beckurts, a matric pupil at Bishops Diocesan College, in his ink drawing titled The Aftermath. He explains, “this artwork was done during the December 2017 school holidays on my grandparent's smallholding in the Elandskraal District between Knysna and Sedgefield, six months after the fire that ravaged the area. My grandparents had a harrowing experience and a narrow escape from the flames that surrounded their house.”

However, the scene also embodies hope. Michael says, “if you were to sit on this empty deck chair you would see encouraging signs of revival in nature: patches of green regrowth and the occasional wild flower. This shows the power of nature and the strength of the human spirit and it brings me hope.”

Michael entered The Aftermath into the Young Creatives Awards, an annual national Art & Design competition held by the Cape Town Creative Academy (CTCA). He won first place, and a R30 000 bursary to study at the school in Woodstock next year.

Gustav Vermeulen, Senior Lecturer at CTCA, says this year’s competition drew over 280 entries from talented young artists across South Africa. “The criteria for choosing a winner included technical skill, versatility in handling the medium and also the artist’s ability to offer a conceptual explanation – to speak in an informed way of how they observed and interpreted their subject matter. Michael showed exceptional observational skill – there is a level of maturity in his work that is highly unusual for someone his age.”

Art has always played an important role in Michael’s life. He was born with diastrophic dysplasia, a condition which affects skeletal and muscular development. He has had many operations, including a neck fusion when he was five years old and a spinal fusion at the age of 12. He began art lessons with Mavis Foale at the age of six as a form of rehabilitation to regain his fine motor skills after surgery. Since then he has not stopped drawing. His many artistic projects include a range of detailed botanical artworks, which he sells to a small but loyal fan-base, and, more recently, a series of landscape drawings created during a 2016 school trip, the Bishop’s Epic, which he turned into cards and sold to raise money for an under-resourced school.

Although Michael uses a wheelchair, he has never let this hold him back and his participation in the Epic – a 16-day excursion in the Cederberg mountains that is regarded as a coming of age experience for the grade 10s – is a case in point. Michael’s mother, Laura Beckurts, praises the staff at Bishop’s for their supportive and inclusive approach. “Bishop’s is a proactive and progressive school, they were willing to run a parallel programme to allow Michael to participate and enjoy a sense of freedom and independence that he hadn’t had before.”

The cards Michael produced after the trip raised R45 000 which he put towards building a classroom at Elizabethfontein Primary, a school in the Cedarberg where he had spent time during the Epic. “The school is so well run,” he says, “the people are wonderful and I was surrounded by so much natural beauty that I just had to capture it.”

Vermeulen believes the CTCA attracts students such as Michael who are not only talented but passionate about pursuing a career in the art and design sector. The Academy’s innovative approach combines the traditional higher education model of rigorous theory and academic learning with technical training and an entrepreneurial focus, delivered in small classes of no more than 15 students. “We offer supportive, individual attention to our students and encourage them to develop their strengths and find a career path most suited to them,” he says.

SMS CTCA to 41199 for more information, or visit www.ctca.co.za