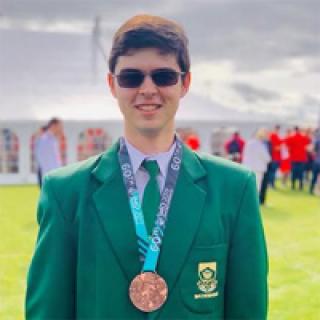 Adri Wessels, Grade 12 learner at Curro Durbanville, was awarded a bronze medal at the 2019 International Maths Olympiad (IMO) in Bath, England. This is the third consecutive year that Wessels has been selected to represent South Africa at the IMO. His team performed exceptionally, being awarded four bronze medals, receiving two honourable mentions, and ranking 46 out of 112 countries - the best performance in a decade.

To be part of the six-member South African IMO team is an extraordinary achievement, and Curro Durbanville has a laudable history of pupils participating in this prestigious international competition.

Earlier this year, Wessels won joint first place in the 2019 UCT Mathematics Competition. There were over 7 500 participants from 400 schools that took part in the competition, making Wessels’ achievement an extraordinary feat. He was also awarded the Lesley Reeler trophy for his overall performance over five consecutive years of participation in the UCT Mathematics Competition. Between 2015 and 2019, Wessels has achieved four first places and one second place, making him eligible for the special award.

Wessels has been participating in mathematics competitions since primary school and has represented South Africa in chess competitions, which helped develop his ability to concentrate and perform critical strategic thinking. His father, Driaan Wessels, says his son’s aptitude for mathematics was clear from an early age and his parents encouraged him to focus on developing his academic abilities. “This mathematical talent is Adri’s own unique ability, and through his own hard work he continues to cultivate and grow that talent. We are very proud.”

In addition to his excellent support system at home, Wessels has received great backing from his school. “The support from Curro accommodates and facilitates entries in competitions, as well as flexibility with normal school assessments allowing me to attend the many competitions. My mathematics teachers also allow me to work in class on competition mathematics problems over and above normal school maths,” says Adri Wessels.

As part of his remarkable academic journey, Wessels has also spent time investing his skills and immense knowledge back into the Curro family. In 2018, he assisted with the training and preparation of other Curro learners for the South African Maths Olympiad and UCT Mathematics competitions.

Wessels’ remarkable mathematics journey serves as inspiration for Curro’s learners, where he’s seen as an early success of the Curro #Learners2Leaders campaign, which celebrates the brand’s mission of developing well-rounded youth with a bright future through quality independent education.

Wessels has already been accepted by the University of Stellenbosch for 2020, where he plans to study abstract mathematics and theoretical physics. He is also considering doing part of his tertiary education at an international university.