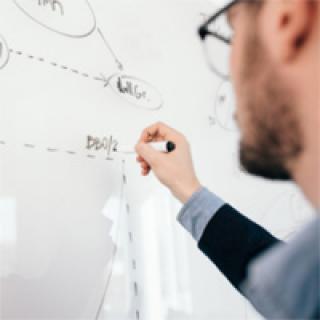 In the early days of software development, the role of the Business Analyst (BA) played an integral part in creating new applications for business use. However, over the years this has evolved into something that is highly flexible and adaptive to change.

Essentially, the BA used to be a translator linking business and software development. The analyst had to be fluent in how the cogs of business turned and needed to have a good comprehension of computer systems. Inevitably, these siloed areas would result in a conflict between business expectations and the final application. Fundamentally, the BA had to ensure that the complex software systems integrated with business processes.

This meant the BA had to elicit requirements through the intense analysis of the business and demonstrate them to software development teams using immensely worded documents and intricate flow diagrams containing a multitude of squares and diamonds. It was both a science and an art.

This approached changed in 2001 when a group of 17 people came down from the Utah mountains in the western United States with the Agile Software development manifesto. This manifesto sought to bridge the language gap that existed between business and software development.

It focused on having working software rather than comprehensive documentation. Essentially, it moved from companies needing to follow a single, defined plan to iterative development cycles that can flexibly respond to changes. This ushered in an era where business users and self-managing software development teams strive towards collaboration and continuous interaction rather than following processes and contract negotiations.

The mentality has also matured. Software developers and engineers now have the freedom to engage on a business level. This is resulting in the introduction of new, disruptive ideas that deliver more effective applications for users

With this modern way of working the ‘language’ barrier between business and development growing, it is reducing the need for the traditional role of the BA. So, where to now for these skilled individuals? What does the future hold for those whose responsibility it was to translate PowerPoint into Power BI?

The reality is that the role of the BA will slowly die out. However, the skillset of these analysts will still be a vital component of the digital environment.

For example, the analytical mindset and big picture thinking will the role of a traditional BA evolve into that of being a Solutionist – an individual with the knowledge of Agile project management methodologies coupled with an analytical mindset to know how software applications can be tactically implemented to strategically drive businesses and disrupt markets.

In fact, the rise of Agile methodologies has introduced several subsequent job titles. These include agile coach, product owner, and scrum master. All of these seek to help software development teams to design and develop fit-for-purpose software applications. It is not uncommon in many organisations for a BA to step into one of these roles.

Steve Jobs, the greatest BA, or should that be Solutionist, once said: “Design is not just what it looks like and feels like. Design is how it works.”

It is this philosophy that will serve to define the transition of the BA into the Solutionist. It is the intrinsic skillset to understand the creative concepts of being innovative and transform them into logical functions. The Solutionist is an idealist who will understand the need to provide customers with cars, even when they ask for faster horses. Solutionists need to have the courage and vision of what the future should look like and find the pieces of the puzzle that fit together to create a magnificent image.

So, those organisations still clinging to the old school concept of the BA must start embracing this change or risk getting left behind forever.