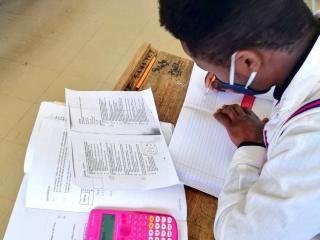 The Maths paper 2 exam was leaked hours before the exam today. This is the first incident of a leaked paper that the department has had to deal with since matric exams kicked off on 5 November.

The department said it will be working with the police to get to the bottom of how the paper got leaked. At the moment, it has identified that learners in Limpopo and Gauteng had access to the paper.

Anyone with information has been urged to come forward so those responsible can face the consequences.

“The Department of Basic Education remains committed to ensuring the credibility and integrity of this important public examination,” the department said.

All candidates writing the final exams are encouraged to focus on the exams ahead of them as the department gets to the bottom of the leak.

More than 1 million candidates have registered to write their final matric exams.

“We certainly have never had to manage a number that large before. It is going to be a huge task, but one that we will need to ensure is managed and coordinated smoothly." said Basic Education Minister Angie Motshekga.

“The late start of the examination is intended to allow as much time as possible to cover critical curriculum content, and to ensure that all examination processes are appropriately managed,” said the Minister.

The Department of Basic Education disappointed at the leak of Matric Mathematics Paper 2 pic.twitter.com/4y2gZzl0cv