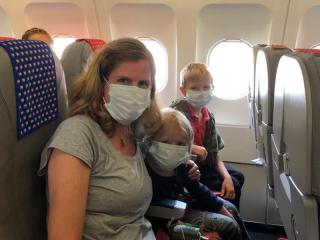 The Department of International Relations and Cooperation (DIRCO) has facilitated the repatriation by air of 5 239 South Africans stranded abroad.

According to DIRCO Minister Naledi Pandor, hundreds more have also returned through the country's land borders.

As several countries went into lockdown to curb the spread of COVID-19, an initial 3 637 requested repatriation.

But the repatriation of citizens has not been easy given the various restrictions implemented by countries across the world.

“The process involved a lot of negotiations with multiple stakeholders, which explains why we couldn’t repatriate some as speedily as we wished.

“We implemented this process to assist our nationals who were in distress - those stranded at airports, students who were asked to evacuate their places of residence as many countries were implementing lockdown, the elderly and those who needed medical attention,” said the Minister.

To properly coordinate the repatriation process, DIRCO established a 24-hour Command Centre, to help those who were unable to reach embassies.

On the estimated cost of the repatriation of citizens, Pandor said while the government had anticipated that repatriation would cost over R90 million the figure hovers far below R10 million.

She attributed the relatively low cost of the repatriation to the assistance of energy and chemical company - Sasol which donated jet fuel. Pandor also highlighted that many of the citizens were able to cover the cost of their return.

“Citizens being repatriated were in the main able to pay for themselves so we have not had to spend tremendous amounts of money. Many of the persons that sought repatriation sought it because flights were cancelled but they were holders of flight tickets,” said the Minister.

On the repatriation of South Africans in Lima, Peru, Pandor said there is a group of South Africans still stranded about nine hours away from the capital. The group cannot travel on the road because of the strict lockdown underway in Peru.

“We continue to appeal for their patience as we explore and negotiate ways of bringing them home. The government of Peru remains open to assisting us for their return,” said the Minister.

Repatriated South Africans seek to return to countries of residence

With some repatriated citizens seeking assistance to return to the countries they were repatriated from, DIRCO clarified that it cannot bear the cost of that repatriation.

“We also want to make it very clear that whilst our government is facilitating the return of our nationals, should they wish to return abroad after the lockdown is lifted we as the government will not have the means to bear any cost of such return.

“We have made it clear to all those who sought help that we were helping those who are ordinarily resident in South Africa. We are not assisting you to come back for a short period and then paying for you to return from the country that you earnestly asked us to return you from,” said the Minister.