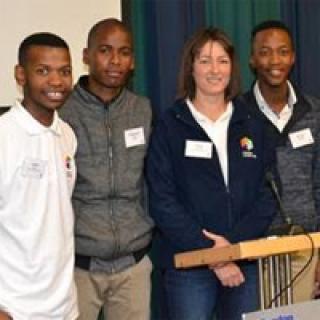 South Africa is experiencing an unprecedented crisis in youth unemployment. According to Statistics South Africa, 55% of 15 to 24 year olds are currently unemployed – a percentage that has been increasing steadily since 2008.* According to the World Economic Forum (WEF), traditional academic teaching does not adequately prepare the youth to thrive in the 21st century in jobs that are becoming increasingly more social-skills intensive. They are not being developed to be adaptable and creative enough to take up the jobs of the future.

In response to this crisis, Columba Leadership is working with 144 schools throughout South Africa to unlock the potential of thousands of young people by equipping them with the skills and confidence to take charge of their own lives and navigate the transition from school to becoming economically active.

Since 2014, more than 79% of tracked participants in Columba’s programme have transitioned to either employment or further education within one year of leaving school – 34% more than the national average rate of transition. As of February 2017, nearly 5 000 people, of which 4 000 are learners, had participated in the programme.

Teams of learners join the programme in Grade 10 and spend two years learning about leadership at a residential academy which connects them to values that help guide choices and decision-making for improved self-management and then through two years of leading social change projects and initiatives in their schools and communities.

”The youth unemployment crisis is fuelled by fragile schools and disengaged youth. By the time learners leave school they are not adequately prepared for the world of work. A practical approach to youth leadership at school level helps them develop skills such as problem-solving, communication, collaboration, initiative, adaptability, grit and leadership – the skills and qualities the WEF highlights as critical for the 21st century**,” says Tracy Hackland, CEO at Columba.Speaking at the event, Andy Searle, Director of BPESA, sees the immense opportunities a connection to Columba offers the youth of South Africa.

“The formal sector in South Africa is employing fewer people, but the call centre industry remains a high growth sector. The sector will however be constrained by a skills deficit. Columba successfully develops young people with a customer service ethic, growing confidence, resilience and leadership skills that can make a significant contribution to this sector”.

“Our focus is to awaken the potential in young people so that they can change the future,” explained Hackland. “Our programme uses a peer-on-peer circle of influence model which encourages participants to recruit their friends and classmates to participate in social change projects. This greatly extends the reach and power of the programme, turning our graduates into change agents, whilst developing their own skills,” she continued.

Teams develop creative solutions to a range of social and educational challenges. They tackle issues such as violence, drugs, teenage pregnancy, discipline, nutrition and sanitation. “An immense opportunity is now presented by a network of over 1 600 Columba graduates who have matriculated but continue to circle back to their schools. Columba’s approach will be to leverage this capacity with a range of services and products which help them to build on the projects they had started whilst at school, but now wish to continue and extend into other schools,” says Hackland.

This approach has yielded substantial economic and social results. Columba’s social return on investment (SROI) has exceeded its initial target of three. In other words, every R1 spent on Columba’s activities has generated more than R3 in social value.

“With sufficient traction in schools, the engagement of our alumni, and sufficient investment, we could reach as many as 120 000 young people over the next five years,” says Hackland. “We are extremely grateful to our partners and our alumni, and we hope that they will help us to take Columba to the next level,” she concluded.