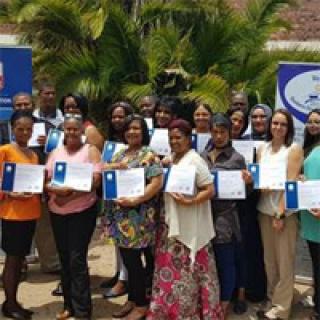 Graduates from the Saldanha community proudly pose with their basic computer literacy certificates that they received last week, 05 December 2018 at the West Coast Business Development Centre (WCBDC). The course forms part of Reputation Matters’ Awesome AfriCAN initiative and was proudly sponsored by the Sea Harvest Foundation.

Over the last six weeks, eleven small business owners and 13 members from the Saldanha community on the West Coast attended a basic computer literacy part time course at the West Coast Business Development Centre (WCDC). The course formed part of Reputation Matters’ Awesome AfriCAN initiative and was made possible thanks to the generous sponsorship received from the Sea Harvest Foundation.

There were two groups that participated in this pilot project. The first group consisted of eleven small business owners, apart from sharpening their skills with basic computer skills, additional skills such as invoicing and reporting skills, including basic business English were incorporated into the course. The second group was attended by 13 members from the community who had never had an opportunity to learn how to work with a computer before. Their course included basic Word, Excel and PowerPoint skills as well as job readiness skills and CV writing.

“We are delighted that three of the community members have already landed themselves a job as a result of the additional skills that they have learnt,” said Welmarie Coetzee, chairperson at the WCDC and procurement manager at Sea Harvest.

Valencia Solomons is one of the community members that attended the classes and proudly said, “As a result of this course, I will be starting my new career as a supervisor next week. I now know how to do a quotation and how to set up a roster, something that I had no idea how to do before the classes started.”

Katrina (Katie) Jeremiah, business owner of Shalom Baking in Vredenburg is one of the entrepreneurs that attended the course, “I worked for a corporate organisation for many years, before starting my own business. It was very frustrating having years of experience, but then when venturing out on your own, you can’t really get anywhere because you don’t know how to.

“I was very scared to use a computer, and felt ‘disabled’ when it came to having to work on a computer. I have walked out of this course with pride and confidence, I am incredibly grateful for this opportunity because I am no longer afraid of a computer. Now I can work out my own quotations and do something to help my business to grow. Thank you so much to everyone for making this opportunity possible.

“Thank you too to the great facilitators Claudine Fredericks and Ashwin Jooste for their patience with us, and getting us skilled up in such a short period of time!” added Jeremiah.

Regarding the Awesome AfriCAN initiative, Regine le Roux, managing director of Reputation Matters says, “At Reputation Matters we specialise in reputation research. We often need to conduct fieldwork and depending on the research assignment, we also need to manually capture data. We saw this as a great opportunity to involve members of the communities in which we work.

“On the one side of the spectrum, our lives are being driven by artificial intelligence (AI), on the other side, many of our community members have not had an opportunity to learn basic computer skills yet; so before we can start with data capturing, we needed to take a step back and get people trained up to be confident in front of a computer,” adds le Roux.

The Awesome AfriCAN initiative looks at empowering community members. The computer course in Saldanha was the second pilot that was completed, the first one was recently completed in Imizamo Yetho in Hout Bay, Cape Town. The vision is to expand the initiative that focuses on basic computer skills, data capturing, entrepreneurship development and job readiness, not just in the Western Cape, but the rest of South Africa and even the rest of the continent! “We have an amazing continent, we need to empower our people to get into the job market, which will stimulate the economy on a micro level and ultimately, the bigger picture, to stimulate the economy across the continent.” continues le Roux.

The course has been offered at no fee to the SMMEs and community members thanks to the generous contribution from the Sea Harvest Foundation and private sponsors to make the pilot a reality and to train up these dedicated 24 participants.

If you would like to get involved in this initiative, please contact Regine le Roux on [email protected] | 083 302 1528 for more information on the West Coast Business Development Centre, visit https://wcbdc.co.za/