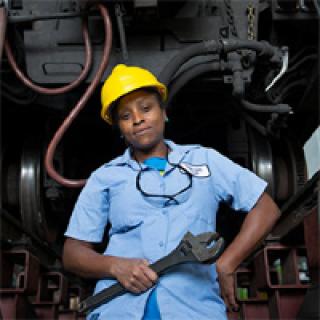 Female blue-collar workers have traditionally lacked power in their employment choices, as marginalised and predominantly uneducated workers, but Fourth Industrial Revolution technology will allow women to participate in jobs that used to exclude them due to their perceived lack of strength, stamina and education level.

However, to unlock this potential, businesses need to provide women with opportunities and skills to embrace technology in order to earn a decent livelihood, says Dr Lize Barclay, Senior Lecturer in Futures Studies and Systems Thinking at the University of Stellenbosch Business School (USB) and contributor to the 2018 South African Board for People Practices (SABPP) Women’s Report launched today (1 August).

Although South Africa has seen a rise in employment of women from 1999 to 2016, with women employed on the skilled technical level (including junior management and as ‘foremen’ and superintendents) rising from 40% to 46%, the semi-skilled level rising from 39% to 42.8%, and the unskilled level rising from 29% to 40.7%, the career prospects of female blue-collar workers and their associated pay is still at the lower-end of the market.

“Working in predominantly male-dominated jobs and industries, with the exception of the clothing and textile industry in South Africa, women in blue-collar positions often hold jobs that support entire families on a single income. There are still high levels of segregation around gender with regard to which jobs are ‘acceptable’ for women to perform, with slow progress being made in enticing women to artisan jobs with financial and career potential.”

Dr Barclay says the current definition of blue-collar workers as people with low or no skills who perform manual labour and predominantly work with their hands on assembly lines, as cleaners, or doing maintenance will change with the on-set of the opportunities the Fourth Industrial Revolution holds.

“Although the saying goes ‘a woman’s place is in the home’, for many centuries the home was the centre of production for families. Food, clothing production, pottery, spinning and weaving, preservation of food, brewing of alcohol, making jewellery, and farming were tasks women proudly fulfilled around the world. The role of women as wives, producers, and providers varied from one culture to another, as it still does today.

Dr Barclay says the Fourth Industrial Revolution need not be feared and businesses should rather re-think employment structures as we know them and harness the opportunity of technology to empower women in realising greater potential and adding more value in the workplace.

“The growing demand for ethical, sustainable, and responsible businesses and products opens up possible opportunities for women to again actively contribute to the manufacturing sector of South Africa as artisans and innovators. Women would be able to for instance, run a microfactory with 3D printing as a sub-contractor for a bigger company, or they can make craft cider by hand for a craft brewery.”

“Jobs that used to exclude women due to their perceived lack of strength and stamina will be accessible for women due to wearable tech, drone assistance, and support by the Internet of Things. This would broaden the choices of employees available to employers. Women will be able to use mixed reality, virtual reality, and augmented reality to train, design, assemble, change products and processes, and communicate with a bot, supervisor, and co-workers from anywhere in the world.”

“Women who are already blue-collar workers may need to learn to code, as that will become a skill similar to typing (looking back to women’s employment opportunities from the 1960s to the 1980s). They should be made comfortable with technology and be assured that they are not destined only for ‘pink-collar’ positions, but for a world of well-paid artisan jobs available to them.

“Furthermore, women involved in events and organisations that promote women in technology should also remember the blue-collar women involved in mining and the manufacturing of hardware, and not only include female designers and start-up owners. HR and line managers should learn from the hipster economy and focus on sustainable, ethical, and responsible practices and include female blue-collar workers in their marketing, public relations and strategic decision-making, and provide decent choices and remuneration.”

Dr Barclay however points out that it’s not only the responsibility of business to up-skill their blue-collar women workers but in order to attract and retain them, industries need to consider the working conditions specific to women.

“Equality is a fragile concept. On the one hand, women deserve equal pay for equal work, but also differentiated treatment to ensure their comfort while pregnant, the food provided, and while commuting to and from their workplace. White-collar workers have made giant leaps in this regard to ensure a safe and comfortable working environment for women, however for many blue-collar workers the gap is even greater.”

Dr Barclay said that the food that blue-collar workers can afford to eat at home and bring to work is often unhealthy, which has led to a rise in non-communicable diseases such as diabetes, high blood sugar, cancer, and obesity. In addition, meals provided in canteens are often meat-intensive and fatty. Women have different nutritional requirements to men, and employee food providers should consider moving to more plant-based menus that focus on micronutrients and not calorie intake alone.

“In South Africa, female blue-collar workers use taxis, trains, and busses to commute, and it is usually the last kilometre to or from the taxi drop-off, bus stop, or train station where they are most vulnerable to attack. Businesses need to realise the risks and offer protection from attack and rape, especially when they work night shifts. It’s not a time to discriminate but rather to embrace the skills set of females and the value they can bring to organisations during this time of positive transition towards working and living with machines.”

The 2018 SABPP Women’s Report focuses on the life and work of women blue-collar workers in South Africa. The report, compiled in collaboration with the University of Stellenbosch Business School (USB) and the University of Johannesburg, is available to download from SABPP Women's Report