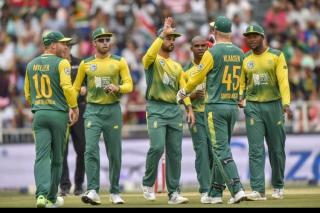 Sport, Arts and Culture Minister Nathi Mthethwa confirmed the resignation of the entire board of Cricket South Africa (CSA) on Monday.

This after the Acting President Beresford Williams alongside Angelo Carolissen, John Mogodi, Donovan May, Tebogo Siko and Dheven Dharmalingam, resigned on Sunday.

“After the Members’ Council had deliberated and resolved that to best serve the interest of cricket in South Africa, the entire board should resign – which they did. All independent and non-independent directors have now resigned,” CSA tweeted on Monday.

CSA said that all the resignations were effective immediately with the exception of three members: Zola Thamae, John Mogodi and Donovan May.

The trio will stay on as remain as directors until the interim board structure has been appointed to ensure continuity and stability.

In a statement on Wednesday, the department said that Mthethwa has also received communication from CSA relating to his invitation to argue their case on why he should not proceed to intervene in their affairs.

“To this end, consultative meetings with the CSA Members’ Council, SASCOC and the South African Cricketers Association (SACA) were held throughout the course of the day, yesterday,” the statement read.

The meetings with South African Sports Confederation and Olympic Committee (SASCOC) and SACA were intended to share the outcomes of the meeting with CSA for keeping key roleplayers abreast of the latest developments, the department explained.

“The meeting with the Members’ Council of CSA was constructive and the Minister expressed his appreciation of their leadership.”

The department said the next step is to finalise details of an interim board and conclude on a list of names.

The Minister is said to announce further details by the end of this week.