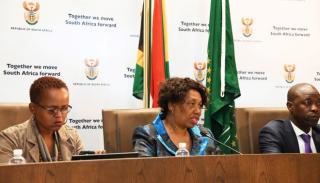 Nearly 2 weeks have gone by since the start of matric exams. Recently, the Department of Basic Education has been dealing with the leak of a maths paper and the minister has addressed the issue.

Minister of Basic Education, Angie Motshekga said learners found guilty of violating exam rules will face the consequences. This comes after the department discovered that exam paper for maths paper 2 was leaked hours before the exam on Monday.

“We are very disappointed that a question paper has been leaked and some learners appear to have had access to it before it was written,” she said.

“As a learner you can be banned for up to three years from writing the National Senior Certificate (NSC) exam and if you are an employee in the system you could be jailed,” Motshekga said.

She said the consequences are often worse for learners than they are for employers, but the department cannot be lenient towards them.

"We have to protect the integrity of the exam for everybody else,"  she said

The Minister said the department would give an elaborate report once all information once the investigation is over.

Rufus Poliah, DBE Chief Director of National Assessment and Public Examinations said it is nothing new for the system to face challenges challenges, but the department has been working to respond with speed to get to the bottom of the investigation.

"Despite the leakage of maths paper 2, that does not imply that the entire examination credibility has now been compromised. There are mechanisms in place to deal with the examination as a whole" he said.

"You can plan and you can put systems and processes in place but there's one aspect that you have no control over, and that is the human element. My assumption is it's the indiscretion of one official, one staff member that would've let to where we are at the particular moment," said Poliah.

Today marks the 11th day of matric exams, 83 papers out of 216 papers have been written.

A total of 1 058 699 candidates have registered to write the final exams taking place at 8 200 exam centres.

The department has hired 45 000 markers who will start marking the exams on 4 January 2021.

For the first time ever, schools will open in 2021 before results are released. The minister said schools will only open during the second week of January, while the department plans to only announce results on 22 February 2021.

“We are pleased with the progress made thus far. It seems initial fears and anxiety have now been allayed. We however remain vigilant,” she said.