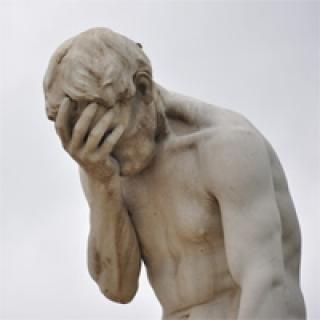 I know a lot of people. And I am acquainted with even more. None of those – and I dare say, no one in this world – relishes the idea of disappointment.

Sure, on some level we all know it’s out there, but none of us wake up every morning raring to be… disappointed. Just doesn’t seem right. I can also not imagine anyone’s bucket list containing ‘be disappointed’ between ‘climb Mount Everest’ and ‘bump into Taylor Swift’. Of course, both of those might lead to disappointment.

Perhaps that’s it. Disappointment is irrevocably linked to expectations, which are, often, linked to our dreams and aspirations. That most futile of all emotions, regret, frequently follows in the wake of a disappointment, making sure the casualty remains down for as long as possible.

Probably the worst kind of disappointment is disappointment with self. A friend (I told you I have a lot) enrolled for a master’s a few years ago. She did very well the first year and loved the material, but she could not finish the course.

Two points are worth noting: Those of us knowing her and looking from the ‘outside’ were, firstly, not surprised. She has always burnt the candle at both ends and, on occasion, tried to get the thing to burn from the middle as well. So when her body pulled the emergency brake in the second year of the master’s, and forced her to make a few life-altering choices, it made perfect sense that some dreams had to either go or be postponed. Secondly, we think just as highly of her as we always did; because with the self-flagellation that she ‘couldn’t suck it up and just get on with it’, she also wondered if people saw her as a failure.

Perhaps she has more issues than Vogue, but I don’t think her response is an unfamiliar one. Disappointed with oneself and fearing it might rub off on others.

A myriad of quotes and viewpoints exist on the topic of disappointment and expectations. Some say one shouldn’t have expectations. Others say disappointment is par for the course. I am not so sure about the former – can you imagine not having any expectations? You’re visiting France, for example, but instead of thinking about and looking forward to lavender fields and Coq au Vin, you draw the curtain over your imagination and think about… nothing? Seems a tad dreary, and unrealistic – pardon the irony.

Is there a middle road? My friend did the following:
1. She owned up about what she felt; gave the emotion a voice and wrestled through it until it lost its potency.
2. She differentiated between her contribution to the situation and her as a person– she needed to set boundaries and look after herself better, yes, but not completing the postgrad did not mean there was anything wrong with her aptitude or intellect.
3. She revisited her expectations and decided that she was not out of line for expecting to do well and complete the degree, but…
4. When looking at the bigger picture, she had to concur that the study, together with her workaholic, unbalanced lifestyle and already ailing health, was a time bomb and in the light of that, expecting to finish the degree was overreaching.
5. She decided to give herself time to get well and reprioritise a number of things in her life. Only then will she decide on a course of action regarding the degree.

What is your opinion? Are there ways that we can better prepare for disappointment?