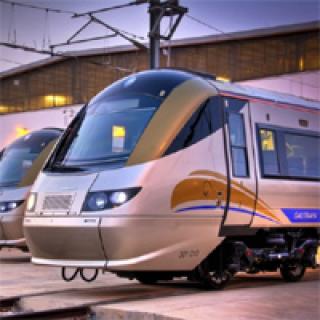 The Gautrain extension project has the capacity to create more than 211 000 direct jobs, says Gauteng MEC for Roads and Transport Ismail Vadi.

Delivering his budget vote on Thursday in the Gauteng Legislature, he said R1.6 billion is the estimated potential spend on skills development, enterprise development and supplier development.

“Passenger demand for the Gautrain has exceeded projections, especially in the peak periods and has resulted in overcrowding and stifled demand. It is therefore necessary to procure more trains and invest in the system so that these trains can run efficiently over the next 10 years,” the MEC said.

The Gautrain Management Agency (GMA) has developed a business case within existing funding parameters for Gautrain and has partnered with the Development Bank of Southern Africa (DBSA) to arrange for the financing for 12 new trains.

“The capital expenditure for additional rolling stock and supporting infrastructure is expected to sustain about 10 000 jobs in Gauteng. The total government revenue is expected to increase by an estimated R542 million in nominal terms between 2019 and 2023,” Vadi said.

The GMA has completed the feasibility study for the extension to the existing Gautrain network. The study was submitted to National Treasury for approval in April 2017. Since then the GMA, Provincial and National Treasury have had engagements to discuss the project in detail.

A decision on the awarding of Treasury Authorisation (TA 1) for the project is expected in the latter half of 2018. Once approval has been granted the planning and Environmental Impact Assessment of Phase 1 will begin.

The Gibela rail manufacturing factory is up and running, and will be officially opened soon.

"Gibela has to supply 3 600 new Metrorail coaches at a cost of R59 billion over a 10-year period ending in 2025. This means that the new Metrorail trains are now being manufactured locally," he said.

The Metrorail rolling stock renewal programme is expected to create 33 000 direct and indirect jobs over the next decade.

In the past financial year, the Gauteng Roads and Transport Department collected R3.7 billion from motor vehicle license and other transport fees.

“This reflects the greater efficiency of our revenue collection systems as well as an increase in the number of vehicles in our province, which currently stands at 4.5 million vehicles,” Vadi said.

The MEC said his department remains a major source of income for the Provincial Treasury.

“Major Gauteng roads should be named after significant leaders who contributed to the freedom of our country and its people, regardless of their race or organisational association,” he said.

The provincial department has been allocated R7.7 billion for its budget.

“Every rand that will be spent from this budget should contribute to making life more liveable and inclusive for citizens in the Gauteng City Region,” the MEC said.

With this budget the Roads Directorate will be upgrading and rehabilitating the K148 in the Eastern Corridor which intersects with the N3 and supports the proposed Tambo -Springs Logistics Hub.

Other road rehabilitation projects include the R55 from Woodmead Drive to Kyalami; the K60 along Waterfall City in the Central and Eastern Corridors; the dualisation of R82 in the Southern Corridor between Johannesburg and Vereeniging as well as the P88/1 between Sebokeng and Westonaria in the Western Corridor.

“The Gauteng City Region, which accounts for the largest share of our country’s economic activity, needs a good quality road network to support its sustainable socio-economic growth and development strategy,” Vadi said. – SAnews.gov.za