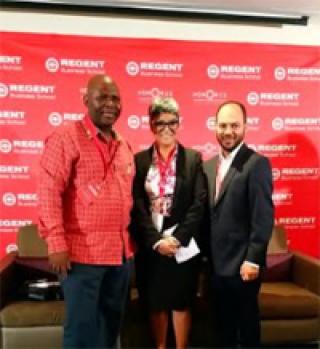 Some of SA’s foremost analytical minds in politics and economics sparked robust debate at the REGENT BUSINESS SCHOOL* Pre-Budget Roundtable when they shared their insights, forecasts and perceptions on Finance Minister, Tito Mboweni’s looming Budget Speech. The Davos-style interactive session at the Crowne Plaza Rosebank in Johannesburg attracted established and enterprising minds in business, as well as individuals who are closely tracking what Finance Minister, Tito Mboweni, is likely to table in his widely-anticipated Budget Speech.

“This event was about speculating as to how Minister Mboweni would steer the nation’s ship, especially against the riptides of local and global problems and challenges,” explains Dr Ahmed Shaikh, Managing Director of REGENT BUSINESS SCHOOL. “Significantly raising South Africa’s economic potential will require breaking away from the equilibrium of low growth and high inequality in which the country has been trapped for decades. In this equilibrium, slow growth and high inequality reinforce each other: inequality fuels the contestation of resources (through taxation, expropriation, corruption and crime), which discourages the investment needed to accelerate job creation and reduce inequality. Solutions are desperately needed to foster an inclusive and sustainable growth trajectory, which amongst other things, means ‘balancing a tightrope’. Could this budget also portend the introduction of a ‘radical transformation’ in the country’s political economy?”

In addition to responding to these questions, the expert panel shared insights, short and long-term forecasts and sobering perspectives on what government’s repair strategy for the ailing economy should entail. They hotly debated a range of contentious issues including government’s anticipated plan to rescue struggling State-Owned Enterprises (SOEs), Eskom in particular, the economic ramifications of the looming election, state capture, growing political instability, weak GDP growth, corruption, crime, poor government finances, and news that Moody’s is likely to downgrade SA’s sovereign credit rating to below investment grade (junk status) if government absorbs Eskom’s debt. The specialists also outlined their respective views on what Minister Mboweni is likely to unveil to bolster business and investor confidence and reassure the global community of South Africa’s economic standing. Professor Fikeni commented “This will be a budget of compromise, Minister Mboweni will have to balance the budget based on political expediencies rather than fiscal realities.” 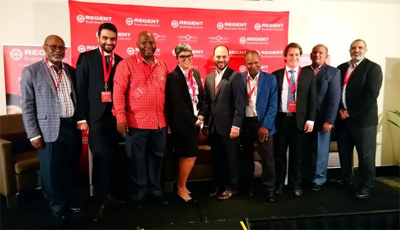 “Given the pressure of rating agencies, the budget will be about addressing issues of investment requirements. This will be a far cry from any inclusive budget necessary for development as prescribed in the National Development plan” said Nadir Thokan

The rapid-fire exchanges among the thought-leaders, the seated audience and the web-streaming participants set the tone for a lively and critical interaction and audience members left with some sobering food for thought.

All that remains to be seen now, is whether Minister Mboweni will manage to pull the proverbial rabbit out the hat to restore confidence when he tables his 2019 Budget Speech in Parliament or whether the delicate balancing act will prove to be a ‘mission impossible task’.