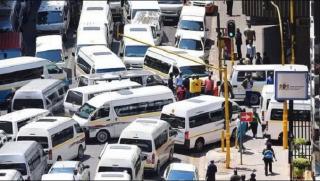 Transport Minister Fikile Mbalula has called on the South African National Taxi Council (Santaco) leadership to reconsider their decision to incite lawlessness, and place their drivers and passengers on a collision course with law enforcement authorities.

This comes after Santaco announced that it has taken a decision to revert to 100% loading capacity in its taxis.

On Sunday, Santaco President Philip Taaibosch announced that taxis will operate at full capacity, while those travelling along long-distance routes will be allowed to continue travelling without a permit.

Taaibosch said if any taxis were stopped by law enforcement and impounded, taxi operations across the country would grind to a halt until the impounded taxi was released.

“We condemn in the strongest possible terms any call encouraging taxi operators to violate provisions of the law and promote lawlessness.

“We remain committed to taking forward our engagements and encourage the industry to ensure that any form of protest they embark upon is within the parameters of the law,” Mbalula said in a statement.

He said government has a responsibility to ensure that all measures put in place as a response to the COVID-19 pandemic are driven by the commitment to preserve human life and avoid an uncontrolled spread of the virus.

“It is on that basis that a decision to allow uncontrolled inter-provincial travel and 100% loading capacity on taxis has to be subjected to the collective decision-making.

“It is rather unfortunate and regrettable that the taxi industry leadership has elected to violate the law and forcefully load taxis at 100% capacity, and undertake inter-provincial operations without the requisite permits, rather than await a decision on the matters they have tabled,” Mbalula said.

He said the legal loading capacity is 70% and enforceable by law enforcement authorities.