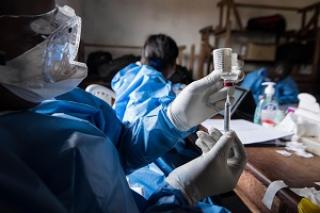 Opinion: Cyril Ramaphosa's government is being roundly criticised for not acting fast enough to secure vaccine supplies to protect health workers and other vulnerable groups from Covid-19.

The delaying is also causing further damage to the economy as the lockdown is extended.  The extension is mainly because of the strain on the healthcare system which is short staffed because so many health care workers are sick with, or have died from, Covid-19..

Two other countries on the African continent have already secured vaccine supplies but the President's last speech to the country only spoke of the first vaccines reaching the country some time between April and June this year.  This will be from the global Covax initiative to support poorer countries in securing vaccine supply.

Almost as soon as the virus was identified at the start of 2020 scientists began work on developing a vaccine. US President Donald Trump has been quick to claim credit for the success of the Pfizer vaccine saying it couldn't have been developed so fast if it hadn't been for his help.

However the fact that multiple vaccines are already approved and being administered in different countries around the world shows that his statement was false. It was the efforts of the international scientific community that developed the vaccines at such great speed - while still going through all the necessary safety trials.

While vaccines are already being administered in the US, UK, Mexico - and also many smaller countries - there is still no firm date when they will be available in South Africa.

The South African government has not signed any deals with vaccine manufacturers - they are relying on the Covax initiative which supports the world's poorer countries in securing supply from pharmaceutical companies.

Other African countries have moved much faster. Egypt and Morocco have both secured vaccine supply directly from AstroZeneca and Sinopharm. Colombia, Costa Rica and Peru are some of the other countries that have already confirmed deals with pharmaceutical companies.

When the President spoke to the country on the 11th of November he proudly announced that the international pharmaceutical company Johnson&Johnson had signed a contract for the South African company Aspen Pharmacare. Aspen will produce 300 million doses of it's Covid-19 vaccine at their production facility in Nelson Mandela Bay.   "This is life-saving medical product that will be needed across the world, which will be manufactured by South African workers".

Speaking just before Christmas to the SABC, Health Minister Dr Zweli Mkhize said that the country faces 'financial constraints' in its efforts to secure vaccines. This has lead to much criticism as the government is still going ahead with plans to provide R10 billion to fund South African Airways, which has been losing money for many years.  Many South Africans would prefer the money to be spent on buying vaccines.

The same government has been planning for years to implement a National Health Insurance scheme to provide medical care for the whole country.  They have repeatedly claimed that it is affordable. But now that the country needs the Covid-19 vaccine we are facing 'financial constraints'.

However the eventual cost to the government might not be as high as the Minister believes. The Covid-19 vaccine would be declared a prescribed minimum benefit so all medical aid members would be able to get one that would be paid for by their medical aid.  The country's largest medical aid scheme, Discovery, has already said that it has put funds aside to ensure that all of its members could access the vaccine. Government employees are members of GEMS medical aid scheme.

In addition, research shows that because of widespread misinformation many people would refuse to take a vaccine.  Research puts this figure anywhere between 35% and 52%.

The demographics of the country also work in our favour in this case. The Covid-19 vaccine cannot be given to those 16 and under.  In South Africa this accounts for 22 million the 58 million population.  Subtract another 1 million people who have already had Covid-19 and recovered - and are therefore not prime candidates for vaccination.

President Cyril Ramaphosa lit a candle for health workers on New Years Eve. When the last figures were released 430 healthcare workers had died from Covid-19. Many more will die between now and, 'the second quarter' of the year which is when we are told that the first vaccine doses will be arriving in South Africa.

There are approximately 380 000 health professionals registered in the country (according to figures from the Department of Health in March this year) so the priority should be to fast track enough vaccine supply to vaccinate them as soon as possible.  Waiting until some time between April and June is not enough.