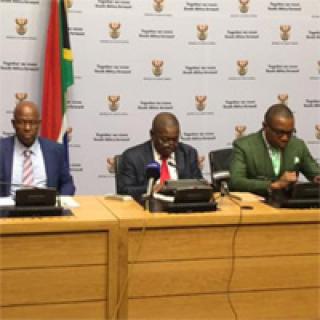 The Department of Higher Education and Training will this year address dysfunction within the examinations system and clear the certification backlog, Minister Blade Nzimande announced on Tuesday.

Presenting his department’s 2017 Budget Vote to Parliament, Minister Nzimande said of the National Certification (Vocational) backlog of 236 821, that the department inherited, only 84 cases remain, and this will be cleared by June 2017.

Minister Nzimande, who described the certificate backlog as an injustice for students, said the backlog for the National Accredited Technical Education Diploma courses is also being addressed.
He said the department also intends to pursue transformation of college curricula.

“One of the biggest interventions we intend to make this year is that of implementing a Technical and Vocational Education and Training (TVET) Connectivity Project, through the (South African National Research and Education Network). “Through this project, all the 267 college campuses will operate on the same ICT network environment as universities.

“Also in the coming year, we will strengthen the sector by developing and revising legislative and other frameworks. We will also standardise the structures of governance across institutions,” Minister Nzimande said.

Minister Nzimande told parliament, "I have re-established SETAs from 1 April 2018 until 31 March 2020, and also extended the National Skills Development Strategy (NSDS III) for the same period".

"Whilst the re-establishment of the SETAs does not imply appointing the same individuals into their boards, this will allow the process of extensive consultation, legislative changes and change management in anticipation of the new system to be ushered in on 1 April 2020".

One campus has been opened in Thabazimbi and two are expected to be opened in the middle of this year in Nkandla and Bambanani in uMhlabuyalingana, KwaZulu-Natal.

Community colleges
This financial year, the priority is to pilot the concept of community colleges to increase educational access to South Africans who never finished school. This will be done in collaboration with the recently established National Forum for Community Colleges.

“Government’s educational interventions, including the Kha Ri Gude Literacy Programme and other post-school interventions, have led to the decrease in the percentage of the population above 20 years of age with no education, from 19% in 1996 to five percent in 2015.

“During this period, the percentage of South Africans with tertiary qualifications has increased considerably,” the Minister said.

Increased access to university education
The Minister stressed the need to improve participation rates by black students, as well as building capacity to transform the institutional culture and curriculum, in line with the calls for the ‘decolonisation’ of universities.

“This requires us to produce a new kind of an academic. It is for this reason that the department has approved and will implement what we call the University Capacity Development Programme (UCDP) from the beginning of the 2018 academic year, which will prioritise historically disadvantaged universities.

“This programme will allocate R900 million in the first year, increasing nominally in subsequent years, to enable the implementation of capacity development activities in universities that are focused on student success, staff development and curriculum transformation.

“This will include the recruitment and training of new academics that are indispensable in the transformation of curricula in our universities,” the Minister said.

“The Task Team will be chaired by the former Deputy Vice Chancellor of UNISA, Professor David Mosoma,” he said. – SAnews.gov.za