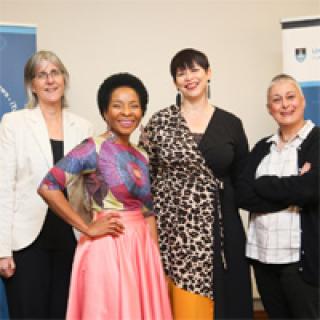 The University of Cape Town (UCT)’s announcement of Professor Sue Harrison as the new Deputy Vice-Chancellor (DVC): Research and Internationalisation means that, in what is a rare moment for higher education across the world, all four leaders in charge of the academic enterprise at the highest level of a university are female.

UCT announced on Thursday morning that Professor Harrison will take over as the new DVC with effect from 1 August 2019 – coincidentally, at the start of Women’s Month.

In addition to the Vice-Chancellor (VC), Professor Mamokgethi Phakeng, the other two women at this highest level are the DVC: Transformation, Professor Loretta Feris and DVC: Teaching and Learning, Associate Professor Lis Lange.

Professor Phakeng said: “This is a significant moment of transformation for women in academia and leadership positions, both in our society and across the world. We are delighted that the UCT Council has placed their confidence in the experience and expertise of each of my executive colleagues.”

Having previously served as Deputy Vice-Chancellor: Research and Internationalisation at UCT since January 2017, Professor Phakeng began her term of office as UCT VC on 1 July 2018. She is a former Vice Principal for Research and Innovation at the University of South Africa.

She began her term of office on 1 February 2018. She joined UCT from the University of Free State, where she has held the same position. Before that she headed UFS’s Institutional & Academic Planning and Research Department.

The former director of the Institute for Marine and Environmental Law in the Faculty of Law at UCT took over as DVC: Transformation on 1 January 2017. She joined UCT as associate professor in 2009 after a five-year stint at the University of Pretoria.

The newest member of this all-female quartet, Professor Harrison is a former deputy dean of research and postgraduate studies in the UCT Faculty of Engineering & the Built Environment. She has been behind the establishment of interdisciplinary research entities at UCT, including the Future Water research institute.