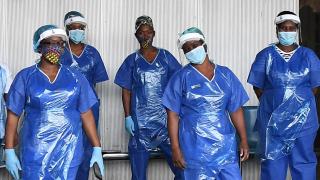 Covid-19 has called for the employment of 13 135 new nurses over SA’s nine provinces since the start of the pandemic.

Speaking at the Society of Private Nurse Practitioners of SA conference on Sunday, Health Minister, Dr Zweli Mkhize, said that he was pleased with the reduced number of infections, saying that this proves that it is “possible to achieve such numbers in such a short space of time”.

He added that the government is relieved but still cautious despite the decline in the number of new daily infections, which have led to fewer hospital admissions and fatalities.

This as South Africa recorded 20 deaths on Sunday, the country’s lowest one-day death toll since 23 May 2020.

In addition, 649 793 people have contracted the disease since the outbreak in March.

“Our recovery rate is now almost at 90% and our mortality rate has remained stable at around 2%,” Mkhize said.

On another positive note, the minister said that mothers who have been infected with the virus have given birth to healthy babies.

“They are breastfeeding and physically bonding with their children, laying foundations for the wholesome upbringing and solid building blocks for a healthy and prosperous society.”

Mkhize said that the achievement that is the decline in cases and fatalities are the result of the passion, dedication and sheer diligence of the country’s nurses and midwives.

“We thank you for braving the threat of being infected yourself, and even of death.”

To date, more than 31 000  of SA’s healthcare workers have contracted Coronavirus, of which many of them are nurses and midwives, while 240 health practitioners succumbed to the disease.

Mkhize expressed his heartfelt condolences to the families of those nurses who lost their lives.

“In December last year, I had the privilege of launching the Nursing Now campaign, a three-year campaign initiated by the global nursing community with the sole objective of improving health care delivery to our people.”

The five key focus areas for the campaign are: ensuring that nurses and midwives have a more prominent voice in health policymaking, encouraging greater investment in the nursing workforce and recruiting more nurses into leadership positions.

It also involves doing more research to help determine where nurses  can have the greatest impact on the community by sharing their best nursing practices.

“Indeed, these key focus points align perfectly with the objectives of the Presidential Health Compact, The Quality Improvement Plan and, ultimately, the National Health Insurance.”

Mkhize said his department will soon publish the Strategic Direction for Nursing Education and Practice that outlines a roadmap for strengthening nursing and midwifery in South Africa for the next five years.

Also, work has been done to broadcast and publicize various sections of the Nursing Act.

The minister ended by thanking nurses for making his job easier than Minister of Health.

“I want to assure you that I share your aspirations of a better world through the work that we do to secure a healthy population for quality of life and prosperity for all.”