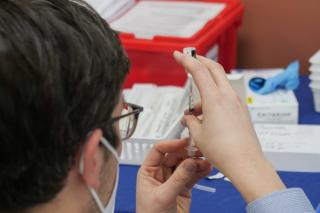 The rollout of the Johnson&Johnson vaccine has been temporarily suspended in South Africa.

This follows the Food and Drug Administration's (FDA) decision to suspend the vaccine in America after a report found blood clots in 6 female patients who were administered the vaccine.

"These incidents occurred between 6 and 13 days after vaccination in women between the ages of 18 and 48 years old. It must be noted that over 6,6 million citizens have been inoculated with Johnson and Johnson vaccine in the U.S." said Health Minister, Dr Zweli Mkhize.

Minister Mkhize said he was advised by scientists to not take the FDA's decision lightly.

"Based on their advice, we have determined to voluntarily suspend our rollout until the causal relationship between the development of clots and the Johnson and Johnson vaccine is sufficiently interrogated. SAHPRA will collate information from Johnson and Johnson,the FDA and other regulatory bodies to make a thorough assessment of the situation and advise us as a regulatory body that has exercised its authoritative powers on the approval of the vaccine in their own right."

It could take a few days or more until the vaccine is cleared, and the Minister is confident that the suspension will not lead to the Johnson&Johnson vaccine being withdrawn.

"We also wish to assure citizens that these kinds of reports are expected to emerge as part of a robust post market surveillance system- this should provide comfort that medical authorities keep a vigilant watch on all new products that are deployed into the market to ensure they remain safe and effective for human consumption. It is for this reason that we implemented the Sisonke Protocol and will also implement a similar post market surveillance study for Pfizer when we roll out the first batch of doses to health care workers." said Mkhize.

This brings the total of secured Pfizer vaccines to 30 million doses in this financial year.

The Minister is confident that the vaccine rollout will be able to continue, in the event that the Johnson&Johnson vaccine is no longer safe for use.