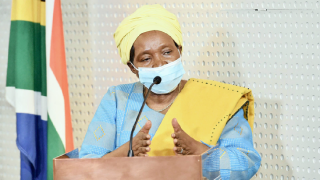 The Minister of Co-operative Governance and Traditional Affairs, Dr Nkosazana Dlamini Zuma released a gazette after amending a section of level 4 regulations on Wednesday.

These amended regulations follow the ongoing unrest in Gauteng and KwaZulu Natal. The updated regulations will allow for meetings to be held in communities that are affected by unrest.

These meetings will need to be hosted by authorised leaders, with the aim of addressing recent issues affecting community members.

"Gatherings at community engagements, hosted by members of Parliament, members of Provincial Legislatures, councilors, leaders of political parties, religious leaders and traditional leaders to deal with emergency matters, are permitted."

Previously, gatherings were prohibited under the lockdown regulations announced by the President on 11 July.

Now, gatherings held with the purpose of dealing with emergency matters in communities are allowed. This change came into effect on 14 July, as government has been trying to restore calm in communities.

A number of suspects have been arrested for looting in provinces, and more arrests are expected if unrest continues.

On 14 July, Acting Minister in the Presidency, Khumbudzo Ntshavheni revealed the number of arrests made by law enforcement.

"The National Prosecuting Authority (NPA) is putting together a team of special prosecutors who have been instructed to oppose bail for suspects associated with public violence and economic sabotage."

Communities have been encouraged to report any criminal incidents to the SAPS hotline by calling 08600 10111.