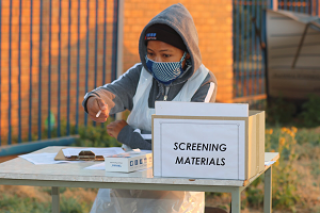 The Department of Basic Education (DBE) has decided to extend its grace to learners who will be writing their final matric exams.

Learners with a temperature above 38°C will be allowed to write in isolation. They will not be allowed to interact with other learners after they have written the exam.

The department reached this decision after seeking advice from the Department of Health, which also advised the DBE to closely monitor learners who have a high temperature.

Recently, the department said if learners test positive during the exam period, they will not be allowed to write. It also said that learners would need to arrive 1hr 30 minutes before the exam in order for screening to take place.

In an effort to fight irregularities, the department will receive daily reports and provinces have been required to submit irregularity reports. Parents and learners have also pledged to report any irregularities that could compromise the exams and other learners.

Umalusi, the Council responsible for setting and monitoring the final matric exam confirmed that the department is ready to start exams on Thursday.

“Despite the negative impact of Covid-19, on teaching and learning, innovative measures have been developed and used to ensure the readiness of the Class of 2020.” said the department.

However, concerns still remain about the final results and long term impact of the Covid-19 on the education system.

Spokesperson for the Department of Basic Education, Elijah Mhlanga said the department is unsure of how many matric learners have dropped out this year.

The department will only get confirmation once matric results have been finalised and released.

Exams are set to run from 5 November until 15 December.