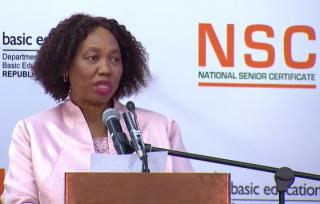 The National Senior Certificate Exams from November and December of 2020 were written by more than 1 million candidates and the Minister has now announced the pass rate.  These unusual results saw the overall results drop by 5 percentage points.

With the significant disruption to the school year and the teaching schedules it was a very difficult year. So this drop to 76.2% pass rate was probably to be expected.

The Minister of Basic Education has announced the final results for the provinces and the overall figures at a national level. The Minister noted that the quality assurance body Umalusi approved the results that she released.

2020 was the second cohort that wrote 12 subjects and 100 candidates wrote SA Sign Language as a subject - which was offered for the first time. For the first time candidates had to write all the papers at the same time - 8 million exam papers were printed and 706 million scripts had to be marked.

More girls than boys achieved diploma and bachelors passes. For the past 10 years the system has been consistently improving.

The overall pass rate including the 76.2% which is a drop of 5.1 percentage points.