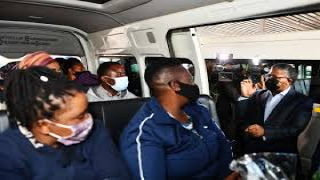 The taxi industry in the Western Cape has recently been in conflict, forcing the national Transport Minister Fikile Mbalula to step in.

Minister Mbalula said he has appointed a panel to deal with the conflict. Several taxi operators, drivers and commuters have lost their lives to the ongoing conflict.

Mbalula said the recent conflict is not the first of its kind between the two associations.

“These two associations have a history of violence and conflict that goes back many years, precipitated by disputes over lucrative routes and ranking facilities,” Mbalula said.

While negotiations have been ongoing for days, the associations have failed to come to an agreement. This has left many employees who use public transport with little to no alternative mode of transport.

In an attempt to put a rest to the conflict, Western Cape MEC for Transport Daylin Mitchell, released a gazette which stated that the provincial government could take action if no agreement is reached.

“Having taken note that the talks between these parties have failed to make any significant progress thus far, government is undertaking its own assessment, guided by its obligation to protect the lives of innocent people, on the implementation of the provisions of the law that should be invoked.

“In the event such provisions are invoked, this affords an opportunity to affected parties to make representations on the proposed measures including closure of routes and ranks,”

“The safety of commuters remains the paramount and overarching priority of whichever outcome of the current processes and is a non-negotiable. The long-term solution should assist us in providing a safe, reliable, affordable and law abiding service for the commuters in the Cape,” the Minister said.