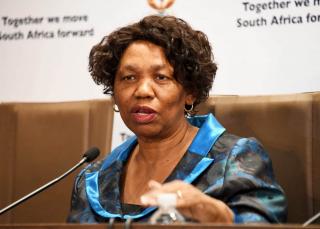 The price of school uniforms has been worrying over the years, as some parents have been struggling to cope with the costs.

“This is very close to my heart and I think anybody who comes from a poor background - like ourselves - or a township will tell you the value of a school uniform,” she said.

In 2020, the Basic Education department and the Competition Commission published a joined circular regarding the procurement of school uniforms.

Now, Minister Motshekga has clarified that the department is still working to make school uniforms more affordable and accessible.

Learners are expected to continue wearing school uniforms, as wearing casual clothes is not a viable option, according to the Minister.

“Home clothes are a big problem because they’re a social indicator and if you remove school uniforms you’re going to begin to show which kids come from rich families and those who don't." said Motshekga.

Wearing casual clothes could make learners feel left out if they are unable to keep up with fashion trends and make them more likely to drop out.

“Young people are sensitive and if they don’t have designer clothes it embarrasses them… They don’t want to be seen in torn clothes and if they don't have shoes it's a big deal and impacts on the image, so they just drop out.”

Minister Motshekga is confident that a school uniform is the best solution to avoid this.

Scrapping school uniforms would go against the department's attempts to keep learners in school, following the disruptions Covid-19 caused in the education sector in 2020.

“The fact that we’re not able to have learners every day at school is a major curriculum problem. Learners now attend in shifts,

“These are growing people, they’re young and restless, when they’re not at school we must keep them engaged and they must be able to socialise," she said, adding that they should limit screen time." said Motshekga.

The Minister has urged parents to do their best to keep learners engaged, as the class of 2021 will have a lot of catching up to do this year.

“This year's Grade 12s attended school for less than six months. They came back in June and when they came back they had to rotate classes. It means schools are starting from 2020 before they can even deal with 2021. It's a problem."

The Zero Dropout Campaign has been trying to address the school dropout rate, as 40% of learners dropout of school before reaching matric.

"The longer we take to put measures in place to intervene and ensure that our learners' engagement is upped, our teaching and learning efforts won't make a difference" said Merle Mansfield of the Zero Dropout Campaign.

In response to the dropout rate, the Campaign has developed an early warning system to track learner disengagement.

The system looks at three factors:

By using this warning system, schools will be able to intervene and give learners support where necessary.