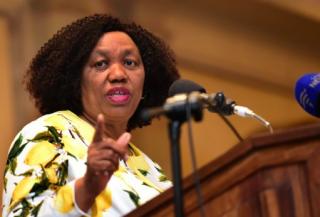 With the total number of school-related Covid-19 cases nearing 5000, the Basic Education Minister, Angie Motshekga held a media briefing over the weekend.

During the briefing, the Minister announced that schools will remain open, despite the country's move to lockdown level 3.

"We believe that schools must remain open and in saying so we are not insensitive to the concerns raised about the rising infections. The position is that we continue to handle COVID cases according to the differentiated strategy, on a province-by-province, school-by-school basis." said Motshekga.

Basic Education Spokesperson, Elijah Mhlanga said the department is aware that some unions are against the reopening of schools.

Mhlanga has said the Department will continue with the school calendar despite protest from unions.

"The position from the sector is that schools should remain open and if there's a need for schools to be closed, it has to be in the affected areas. We don't feel that it is fair [closing schools] because there are many areas in the country where there hasn't been any impact of the coronavirus in terms of cases in schools."

Mhlanga has called on unions such as the Congress of South African Students (COSAS) to not disrupt schools in an attempt to force school closures.

The department fears that these gatherings could lead to the spread of Covid-19, putting more people at risk.

He has reassured parents that schools have measures in place to ensure that all learners are safe and screened daily for Covid-19.

Parents have been encouraged to send learners to school instead of keeping them at home, as this will allow learners to be in a controlled learning environment.

"We hope that parents will realise that learners being at school is better than at home where usually there's no supervision.

"It's better to be in school because it's a structured, organised environment where learning also takes place. We need to all move towards thinking about opening schools in full rather than making calls for schools to be closed. We find such calls to be irresponsible because when we prepare to reopen schools, those people who are calling for school closures are not there to help us."