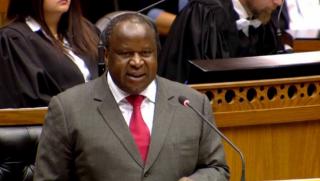 Finance Minister Tito Mboweni says there is a need to trim civil servant perks and stop wastages as the debt to GDP ratio is expected to rise to 71.3% in 2023.

This will include relooking at how much the public service spends on Ministerial cars, cellphone benefits and ensuring that everyone -- including Ministers, the provincial executive and Mayors -- travel economy class for all domestic flights.

The Minister said this when he briefed the media ahead of tabling the Medium-Term Budget Policy Statement at the Imbizo Centre on Wednesday.

“There are a number of risks to the fiscal framework, which this government has to confront head-on. The debt to GDP ratio is beginning to reach unsustainable levels. Once the debt to GDP reaches 60%, we should be concerned. Ideally, it should be 30% or lower.

“So the debt to GDP ratio is a very serious matter we need to attend to,” Mboweni said.

In the past, Ministers used to travel first class with their assistants. This was changed and currently, Ministers are eligible to travel business class.

Mboweni said government will stop buying cellphones for public representatives and senior managers in the public service. This area of expenditure will be looked at with a view of forcing public servants to buy their own phones and claim for official calls.

He said an audit of how much government spends on cellphones currently stood at R5 billion “on a 12 month basis”.

Mboweni said the desirable sweet spot would be to see the GDP to debt ratio stabilising at 64% in 2022.

“Now we are in October 2019, and we have a few months to go before the February 2020 budget. In reality, it means we have some time for some very serious conversations.”

The Minister said National Treasury is looking at ways of capping spend on official cars to not exceed R800 000, including VAT.

What needs to be done to stabilise debt

Mboweni said the problem with the country is that government spends more than it makes.

“Our problem is that we spend more than we earn. It is as simple as that. How will we fix our problem? To stabilise debt, government will target a primary balance by 2022/23. The target measure excludes support to Eskom because that is part of a separate process.

In addition, non‐interest spending in the outer year of the framework is constrained in line with consumer price inflation. Mboweni said if the country wants to achieve its target, there is a need to find additional measures in excess of R150 billion over the next three years or about R50 billion a year.

“How will we do this? We will need to deal with the challenges of the wage bill, State‐owned companies, executive remuneration and benefits and fiscal leakages,” said the Minister.

He hinted at the possibility of selling off non-strategic assets in order to raise some cash.

“[The National Treasury Director-General] and myself have an agreement that we are going to sell some assets. When you are in difficult times … you rebalance your portfolio.

“The Director-General and I are looking very carefully to decide which of these State-owned entities (SOEs) should be in public hands and which ones shouldn’t be. We have time between now and February to seriously deal with these issues,” he said. – SAnews.gov.za