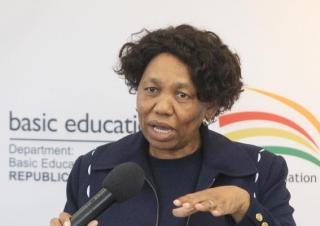 This after fake news appeared on various social media platforms alleging that the Minister’s husband, Dr Mathole Motshekga is involved in the production of sanitizers to schools.

“The allegations are absolutely not true and totally malicious. Dr Mathole Motshekga, husband to Minister Angie Motshekga does not own, or plan to own a factory that produces or supplies sanitizers or personal protective equipment to schools,” said the Minister’s office in a statement on Tuesday.

The Minister’s office pointed out that Dr Motshekga is a politician currently serving as the Chairperson of the Ad-Hoc Committee of Section 25 on the Expropriation of Land.

The office also dismissed claims around the Kara Heritage Institute.

“Further allegations that the Kara Heritage Institute which Dr Motshekga founded sells books to schools is a blatant lie. The Institute is not a commercial business and has no interest whatsoever in making business with the government, let alone the Department of Basic Education.”

Allegations made against Dr Motshekga attempt to link Minister Motshekga to the allegations.

Meanwhile, the Minister has condemned all forms of corruption, adding that education is the only way in which to reverse poverty.

“Schools do not only provide education but is an important institution that provides for the holistic wellbeing of children. The long absence from school puts younger children at a high risk of social decadence and delinquent behaviours such as crime, drug addiction and unplanned pregnancies, hence it is important to keep children in school for as long as possible.”