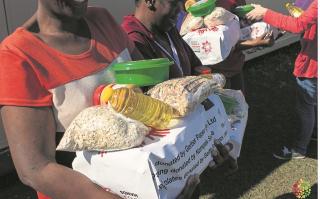 KZN Social Development MEC, Nonhlanhla Khoza, has started a formal investigation into the failure of non-profit organisations (NPOs) to deliver social relief of distress (SRD) to qualifying communities around the province.

During meetings between the MEC and departmental management, NPOs stated that the reason they were unable to meet the demand was due to a lack of capacity – despite receiving R25 million for SRD by the department this quarter.

The MEC has taken it upon herself to start an investigation, which will begin shortly.

“The investigation will determine circumstances surrounding the payment to NPOs to render this critical service, but now claiming that their coffers have been depleted due to operational costs,” Khoza said.

She warned that the department is clamping down on corruption and demands clean governance.

“Our obligation as Members of the Executive is to ensure that public funds are managed properly. The time for people to just get away with mismanagement and abuse of public funds should come to an end.

“The department has used these NPOs, even allocated assets to them, such as bakkies, trucks, forklifts and petrol cards to deliver SRD,” Khoza said.

The MEC also voiced her concern about the inconsistencies of officials responsible for working closely with the NPOs in question to provide such services to those in need.

“It is impossible that the department can pay such a huge amount of money to benefit the poor, but only to be told that the [money] was exhausted without producing any portfolio of evidence.

“We cannot accept that SRD only reached a few beneficiaries, but the funds have already been exhausted. These NPOs, together with officials responsible, should provide us with evidence as to where and when the food was delivered,” Khoza said.

This investigation will shed light on the current situation surrounding the SRD.

“Any NPO that receives money from the department to serve the people should account for every cent used. We have since directed the Head of Department, Nelisiwe Vilakazi, to institute an investigation into the matter, Khoza said.

“We owe it to the people of KwaZulu-Natal to account for the funds that we are given a responsibility to manage. The investigation will get to the bottom of this matter so that we can rid the department of maladministration and focus on service delivery to the people.”