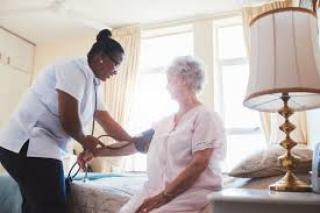 A trend analysis by the Compensation Fund has revealed that women make up the majority of COVID-19 related claims, with the most affected workers being nurses.

This is according to claims lodged with the Compensation Fund, which indicate that more than 80% of the cases received so far involve women.

“This is consistent in all provinces,” the Department of Employment and Labour said in a statement.

As Coronavirus continues to make its devastating presence felt, the department says it finds itself at the centre of not only having to support workers through relief payments but also now has to deal with the ever-rising number of claims as people get sick at work.

In a statement on Wednesday, the department said the Fund has to date received 941 claims, with the highest number coming from the Western Cape, with 657 claims.

“Of that total, 533 are women. The Fund has accepted liability for 356, repudiated 69 and 233 are pending adjudication.

"In the Eastern Cape, 99 claimants are women, out of a total of 127 claims received. The Fund has accepted liability for 26, while three have been repudiated and 98 await adjudication,” the department said.

Kwa-Zulu Natal has seen 98 claims, 67 of which have been accepted, five repudiated and 26 await adjudication. The total number of women who are affected in that province is 92.

Gauteng province has recorded 54 claims -- 46 affect women, 31 have been accepted, seven repudiated and 16 are pending adjudication.

Limpopo and the North West have recorded two claims each, with one accepted in Limpopo, one repudiated and both claimants are women, while in the North West, one claimant is a woman.

Mpumalanga has one case which has been accepted. The claimant is a woman.

“We are aware that our frontline workers like nurses and other medical staff have been affected by the pandemic. We would like to send an appeal for employers to ensure that workers are adequately protected and are given the necessary protective gear to do their jobs.

"Our figures show that the most affected employees are nurses, who are paying the ultimate price so that we get a second chance to survive the pandemic,” said Labour Minister Thulas Nxesi.

The Minister said the Inspection and Enforcement Services of the department has upped its in loco inspections to ensure that workers are protected and that the letter and spirit of the COVID-19 safety regulations are followed.

“Unfortunately, we continue to see low levels of compliance, with compliance rates hovering at 57% for the private sector and 47% for the public sector. Since the start of the lockdown, we have served 385 prohibition notices and overall, 2 475 notices were served,” said Nxesi.

He stressed that all employers have a duty to care for their employees and ensure their safety.

“Equally, workers should refuse to work under dangerous conditions. Just this week, a company that flouted labour laws and did not adhere to lockdown regulations was found guilty and fined. It was the workers in that company who blew the whistle and both employer and employee have a responsibility for health and safety, albeit with differing roles,” said Nxesi.