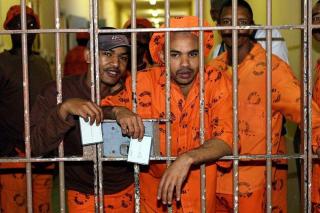 Justice and Correctional Services Minister Ronald Lamola says 4 138 low-risk offenders have been released on parole to ease prison population figures to minimise the risk of Coronavirus spreading in correctional centres.

Lamola said this when Ministers in the Justice, Crime Prevention and Security cluster fielded questions in the National Council of Provinces (NCOP) on Tuesday.

“Yes, minimum progress has been made due to the processes to be followed when releasing sentenced offenders on parole. On 11 May 2020, the department began with the process to release selected low-risk offenders and initial releases started from 20 May 2020. As of 24 June 2020, the total number offenders released was 4 138,” he said.

This comes after President Cyril Ramaphosa approved the parole of about 19 000 low-risk offenders in an effort to curb the spread of COVID-19 in overcrowded prisons.

Responding to oral questions on Tueday, Lamola said prior to the releases, the total prison population stood at 154 943, with 101 928 being sentenced offenders, and 53 015 accounting for remand detainees and other unsentenced inmates.

“This translated to a total population of 30.68% overpopulation, which made social distancing difficult.

Lamola said out of the total, 329 were released in the Eastern Cape, 730 in Gauteng, 882 in KwaZulu-Natal, 565 in Limpopo, Mpumalanga and North West, 634 in the Free State and Northern Cape, while the remaining 998 came from the Western Cape.

He said plans have been made to integrate such inmates back into society to avoid re-offending.

The department will implement a phased-in approach, stretching over a period of 10 weeks to allow for proper consideration of the qualifying offenders.

“The qualifying offenders will be placed into the system of Community Corrections to continue serving their sentences and comply with set conditions of placement. The department has the capacity to consider offenders and place those who will qualify,” Lamola said.

Only low-risk offenders, who meet all the requirements and conditions, will be placed on parole.

“The requirement [is] that only offenders, who have undergone relevant rehabilitation programmes aimed at addressing their offending behaviour, would qualify for placement, as this would minimise the risk of re-offending.

“There are two additional requirements for placements on parole, including taking of fingerprints and DNA samples for comparison with the South African Police Services (SAPS) database as a prerequisite for placement.

“Every qualifying sentenced offender’s profile will be assessed and considered individually by the Parole Board before they make their recommendations for placement on parole.

“This will include affording victims the opportunity to make representations on why an offender should not be placed on parole,” said the Minister, adding that all relevant factors will be taken into consideration during this process, which will include any prior convictions for violent offences committed.