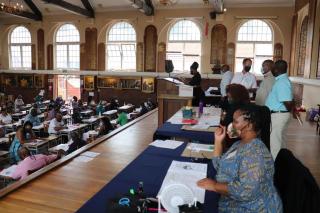 More than 1000 teachers have quit marking, nationwide. There has been some concern about the Gauteng Department of Education, as the province that has lost the most exam markers.

A total of 887 markers pulled out at the last minute. The markers gave various reasons, linked to contracting or being exposed to Covid-19.

Training for markers began on Monday and is expected to end on 22 January.

"We have the strictest conditions in terms of adherence to our protocols, we encourage social distancing, we have educator assistants that are in our venues. They assist to check social distancing and make sure that we don't have large groups, especially during breaks. During breaks and lunch time people might converge and want to interact with each other so we discourage that at all costs." said Mabona

He said teachers are screened 3 times a day to make sure that all precautionary measures are followed.

"During meal and tea times, there would be not more than 50 persons in a particular area and meals will be provided in disposable containers so that markers can partake of their meals on the school grounds or wherever they consider to be safe."
"All officials, markers, senior markers, deputy chief markers, chief markers & internal moderators must:
a.Wear a face mask
b.Adhere to health & hygiene protocols
c.Maintain a distance of at least one and a half metres from each other" said the Department of Basic Education.
In total, the Gauteng department has hired 12 000 markers, while the national Department of Basic Education has hired a total of 45 000 markers nationwide.

"Three PEDs (Limpopo, Mpumalanga and Gauteng) adopted a staggered approach. Commenced with marking of selected subjects, where there are marker shortages, in early December." said the department.