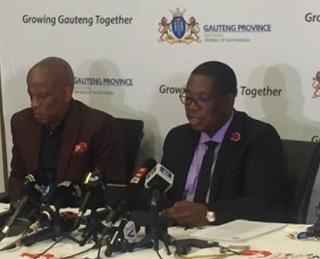 (Earlier today Enock's uncle confirmed to the media that his first name is spelt with a 'k', not an 'h' as previously communicated by the Gauteng Education Department.)

After receiving a preliminary report from an independent law firm tasked with investigating the incident the MEC has suspended the Head Teacher, Malcolm WIlliams.  Williams has been served with a letter of suspension and will be the subject of a disciplinary hearing once the full report has been received.

MEC for Education Panyasa Lesufi announced at a press conference that the preliminary report showed that while the school had applied for permission with the Education Department for the camp, when it took place formal permission had not been received from the Department. Lesufi announced that as Williams is the delegated authority who is responsible for the school and the safety of learners at the school, the decision was taken to suspend him.

A trip arranged by Parktown Boys High School to Bloemfontein scheduled for January has been cancelled.

The Department had already decided that all water related trips and activites at schools must be approved by the Education Department head office, rather than the district office.  All current camps must also be

The MEC concluded the press briefing by stating that Parktown Boys High is not a dysfunctional school and in many ways was a top performing school in the province. However there were aspects of the school that were a problem and need to be 'cleaned' added Lesufi.

The MEC and department will be briefing parents of the school on Friday evening.

The funeral service for Enock will take place on Saturday between 12 and 2pm and Lesufi announced that the Department was assisting with finding a venue. The venue will need to accomodate a large group as it is expected to include learners from Enock's primary school as well as the high school.

Do You Believe This Was The Right Action To Take? Add Your Opinion Below To The Comments Section.