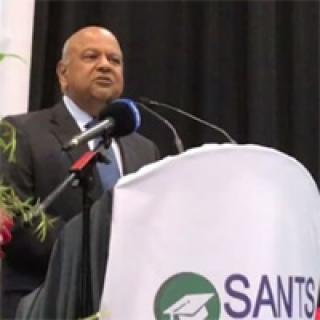 As a response to the skills demand in the country 776 students from rural areas were trained to become qualified teachers.

Sants Private Higher Education Institution together with the KwaZulu-Natal department of education joined forces to help unemployed students pursue a career in teaching.

The initiative which began in 2012 culminated at the graduation ceremony held in Durban n Saturday, which saw 776 student teachers receive degrees in the foundation and intermediate phases.

The ceremony was attended by Finance minister Pravin Gordhan who said, “we live in a country that has huge possibilities for all of us. It’s a country where education can play an absolutely critical role in deepening democracy, in making sure that all of us have a say in the way in which our country is run and the way in which democracy is established.”

Minister Gordhan congratulated the student teachers and stressed that education was the key to unlocking opportunities for all.

According to Professor Jean Baxen, executive academic director of Sant, these selected students received financial assistance as well as intensive support at various support centres throughout their academic programme.

In 2015 a research report conducted by the Centre for Development and Enterprise identified the need for 30 000 new teachers annually, between 2013 and 2030. It revealed that teachers with an indigenous African language were particularly rare.

This teaching initiative is expected to help address this shortfall while giving previously unemployed students a productive career path.