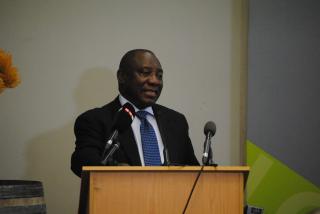 President Cyril Ramaphosa has announced his new Cabinet, after weeks of speculation on who will serve as Deputy President, and whether Pravin Gordhan will keep his position. There was tension till the end as the 8pm starting time for the press conference was delayed by more than half an hour.

When he spoke to the public President Ramaphosa announced that the total number of government departments has been reduced from 36 to 28.

Ramaphosa announced that the Deputy President will be David Mabuza.

The President highlighted that his Cabinet is groundbreaking in many ways. "For the first time in the history of our country, half of all Ministers are women. We have also included a significant number of young people. This is in fulfillment of our commitment to giving young people roles of responsibility in all sectors of society. This is part of a generational transition in which we are creating a pipeline of leaders to take our country further into the future," said Ramaphosa.