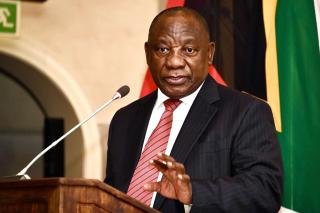 The president’s spokesperson, Khusela Diko, says that Mr Ramaphosa made the decision on the 24th of March to test for the virus as a precautionary measure after being advised to do so by his physician. He received the test results last night. It was revealed last week that there were fears of exposure to the highly contagious virus within the presidency after a staffer was sent home for testing.

Diko went on to confirm the details, saying that the person was an intern working in the office’s finance unit. “Yes, we can confirm that an intern in the Finance unit in the Presidency reported that he may have crossed paths with someone diagnosed with the coronavirus,”

The employee also tested negative for the virus.

Diko concluded the statement by saying that the decision to release the president’s test results was made to assure the nation that he was not at risk or a risk to others.

“The Presidency has deemed it necessary to make the test results public to reassure the nation that the President is in good health and continues with his duties.”